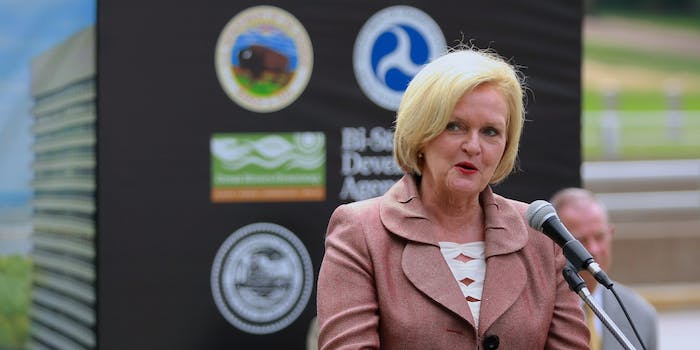 'It's a little scary, but my prognosis is good and I expect a full recovery.'

Sen. Claire McCaskill announced in a Tumblr post on Monday that she had been diagnosed with breast cancer.

“I very recently learned that I have breast cancer. It was detected through a regular mammogram,” wrote McCaskill, a Missouri Democrat. “It’s a little scary, but my prognosis is good and I expect a full recovery.”

McCaskill, 62, said she would receive treatment over the next three weeks in St. Louis.

“During this time my staff will continue to assist Missourians and I will be posting on my Senate website how I would have voted on any matters that come before the Senate during my absence,” she added, “which I’ll also enter into the Congressional record.”

Born in Rolla, Missouri, McCaskill began her legal career in 1978 as an assistant prosecutor in Kansas City and has been blazing a trail for women in Missouri politics ever since.

.@clairecmc If ever cancer picked the wrong person to mess with, it's you. Stay strong and take care of yourself. I'm in your corner. -H

About one in eight woman will be diagnosed in the U.S. with invasive breast cancer over the course of their lifetimes. The most common symptom is a lump or mass in the breast. The American Cancer Society recommends annual mammograms for woman ages 40 to 54, and screenings twice a year for older women.