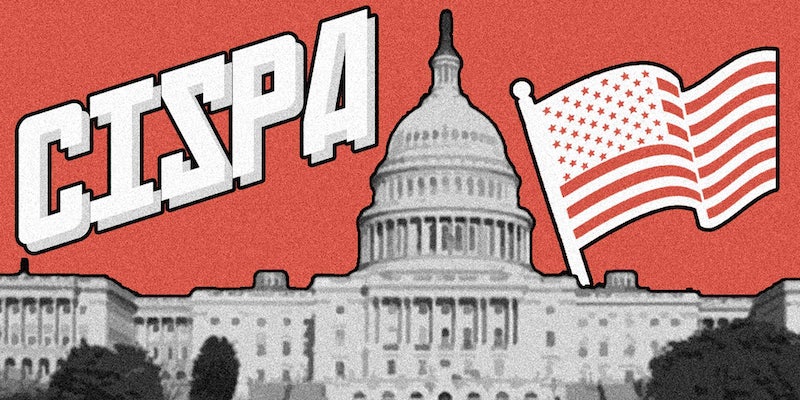 CISPA may already be dead in the Senate

Sources say the Senate will decline to pick up the controversial bill, which passed the House this month, because of its lack of privacy protections.

Experts and sources with knowledge of the situation say the most controversial Internet bill of the year, the Cyber Information Sharing and Protection Act (CISPA), is already dead in the water.

That’s good news for the millions worldwide who have formally registered their opposition to the bill. Designed to help the U.S. fight online attacks, CISPA would make it easier for corporations that are hacked to pass what they know to government agencies—including, critics say, swaths of your private information that would otherwise be protected by law.

But though CISPA resoundingly passed the House of Representatives April 18, “it is extremely unlikely for the Senate” to vote on the bill,” the ACLU’s Michelle Richardson told the Daily Dot.

A Senate committee aide, who requested to not be named, told the Daily Dot that “there is no possible plan to bring up CISPA,” in the Senate. The aide cited the fact that the Senate tried to pass its own cybersecurity bill, the Cybersecurity Act of 2012 (CSA). While unsuccessful, it underscored a desire for legislation that took more explicit efforts to protect individuals’ Internet privacy.

“There are just too many problems with it,” the aide said of CISPA.

This is backed up by U.S. News and World Report, which has reported that a staffer on the Senate’s Committee on Commerce, Science and Transportation explicitly claims CISPA is no longer a possibility, and senators are “drafting separate bills” to include some CISPA provisions.

It would hardly be shocking if the Democrat-controlled Senate declined to consider CISPA. That’s what happened last year after the bill passed the Republican-controlled House, same as this year. And in both cases, the Obama administration promised to veto the bill, citing its lack of privacy protections.

CISPA has had a consistent champion, Mike Rogers (R-Mich.), who introduced the bill both times and has campaigned for it throughout the past year. By contrast, the CSA was the brainchild of Joe Lieberman (I-Conn.), who has since retired. It’s unclear how the Senate will deal with the issue of cybersecurity, which has become a hotter topic on the Hill after a blockbuster report found that the Chinese government was secretly responsible for a number of hacking attacks on the U.S.

“I’ve heard that the Senate versions [of a cybersecurity bill] are in the works, but get the impression it is more long term,” Richardson said.