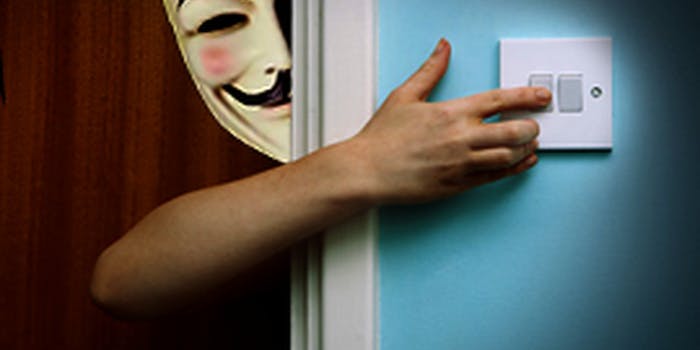 Can controversial cybersecurity bill CISPA be defeated with a Web-wide protest?

The Cyber Intelligence Sharing and Protection Act, CISPA, aims to vastly enhance the government’s ability to get information from private companies in the event of a cyberattack—up to and including users’ personal data. Anonymous, naturally, has sworn to fight it to the last pixel.

The Pastebin press release from YourAnonNews says, “[CISPA is] the online equivalent of allowing a police officer to enter your home and start rummaging through your personal files without the permission of a court. The politicians who introduced this law pretend it will protect you but what it really does is circumvent your Fourth Amendment rights. CISPA also prevents you from suing companies when they illegally use your information.”

Last year, on January 18 they called for another blackout, to protest SOPA, the Stop Online Piracy Act, a corporate-funded push for tighter controls and more serious punishments for downloaders; with the support of Google, Reddit, Wikipedia and other major sites, the protest went viral and the bill was defeated. Participation was far from universal, but enough to make a point, and the government decided that politically, it wasn’t worth the risk.

The House passed the bill last Wednesday, and now there’s only the Senate standing between it and law. CISPA also passed the House last year, but it never came up for a vote in the Senate. The bill’s sponsored reintroduced it this year, promising to address private advocates’ concerns. However, the new CISPA looks almost exactly like the old one—and, like last year, the President has threatened to veto the bill unless privacy protections are added.

Anonymous hopes to make clear that opposition to CISPA is widespread and powerful; in short, that it is the will of the American people to maintain their privacy online, even from their government, unless that government has a warrant.

An accelerating tweetstorm has been brewing for the past several days; however, the effectiveness is muted by the fact that there is no single hashtag: #CISPA, #CISPAblackout, #stopCISPA, and #internetblackout have all been used. They are being used a lot, though. A Topsy.com analysis shows that #CISPAblackout alone has gone from 8 mentions on April 16, the day before CISPA passed the House, to over 20,000 per day on April 19 and 20. The #Anonymous hashtag itself has been completely CISPA-dominated.

The subreddit r/funny, with more than 3.6 million subscribers, is blacked out to protest CISPA—although r/politics is not—but WordPress.com, which offered a blackout option last year for SOPA, hasn’t reinstated the blog blackout feature this year. According to PC World, more than 7,000 different websites participated in last year’s SOPA blackout, and according to AnonyOps’ website 373 sites have thus far signed up to go dark on Monday. There’s also a Twibbon campaign to replace your Twitter avatar, and as mentioned, supporters are encouraged to tweet all day about the issue.

If CISPA passes the Senate, it’s likely that this action will be a dry run for a larger, more desperate action to convince the White House to keep its promise of a veto. And after that?