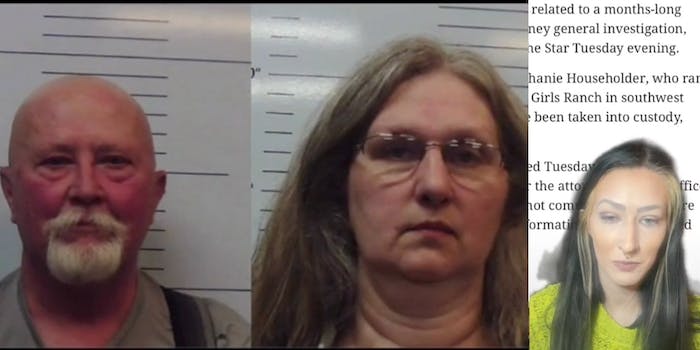 The couple was charged 'with a combined 102 felonies that allege incidents of statutory rape, sodomy, and child molestation.'

With the help of TikTok videos made by their daughter, a couple was charged with the alleged sexual abuse at a Christian reform school in Missouri.

According to a St. Louis Post-Dispatch report, Boyd and Stephanie Householder, “who ran now-defunct Circle of Hope Girls Ranch and Boarding School in Cedar County, a religious boarding school for troubled girls in southwest Missouri,” were scheduled for arraignment in county’s circuit court.

Amanda Householder has been ringing the bell for attention to be called to Circle of Hope via a popular TikTok page, @exposingagapeboysranch. Circle of Hope and its practices appears to have spawned from Agapé Boarding School, another Christian-based boarding school with similar allegations.

She says she’s been overwhelmed with the responses but that she’s “sad” at the arrests of her parents. However, she says the elder Householders “made their bed, and now they’re gonna have to lay in it” and that “it’s about time.”

Allegations of abuse at Circle of Hope have been public since at least 2011 with the publishing of a Mother Jones article on similar institutions.

The couple was charged Wednesday “with a combined 102 felonies that allege incidents of statutory rape, sodomy, and child molestation among other crimes,” Missouri Attorney General Eric Schmitt said in a statement.

“As the father of two young girls, it is simply unthinkable that this type of abuse could be perpetrated against those who are so vulnerable, as well as on families of the victims,” Schmitt said at a news conference, as reported by the Post-Dispatch.

Many of the details of the charges, specifically against Boyd Householder while at Circle of Hope, are gruesome, per Schmitt. The attorney said victims who came forward documented instances of Householder “slamming victims’ heads or bodies against walls, slapping or hitting victims with his hands or belt or other instrument, shoving a victim’s face into horse manure, pouring hot sauce down a victim’s throat, and other instances of physical abuse.”

According to an NBC News report on Agapé, “seven former students said staff members had assaulted them. Other punishments, the former students and staff members said, included forcing boys to stare at a wall for hours, limiting meals to peanut butter sandwiches, and requiring students to haul rocks outside from one pile to another.”

Agapé remains open, despite the allegations arising from extremely vocal former students, such as Colton Schrag.

Part of the understanding on how both Circle of Hope and Agapé were able to go unchecked, is because they are religious schools. Missouri exempts religious institutions, such a so-called Christian reform school, from “the state rules governing secular boarding schools and children’s homes.”