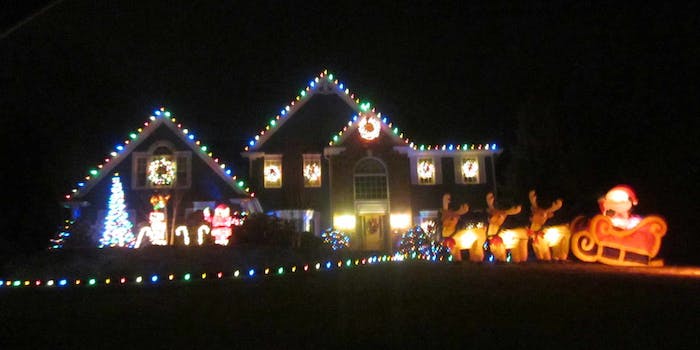 Your Christmas lights might be killing your Wi-Fi signal

It's the worst present ever.

Have you already decked your halls with decorations and your house with lights in preparation for the holiday season? Well, tone down your enthusiasm a bit because it might be ruining the Wi-Fi connection.

According to United Kingdom communications regulator Ofcom, the Christmas lights you wrapped the tree in and ran all along the exterior of your house can interfere with your wireless internet signal.

“They can affect your Wi-Fi because they cause electrical interference,” Lucy Aldington, Communications Director for Ofcom told the Daily Dot. “This means they are all sending electrical signals at the same time, causing an electromagnetic disturbance or interference.”

Ofcom came to its discovery after a recent report on Internet speeds and connectivity in the U.K. The findings showed that wireless devices such as baby monitors and phones may be using one of the channels also occupied by the Wi-Fi router, leading to slower speeds and connection issues. Ofcom found that over 6 million homes and offices could boost their Internet speed with some simple fixes.

To combat these common but unaccounted for intrusions that are causing buffering issues with that YouTube video you’re trying to watch, Ofcom released a Wi-Fi Checker app for iOS and Android devices.

According to Aldington, the app tests the connection between router and smartphone or tablet by “send[ing] data back and forth to see whether the connection is accurate and responsive. This allows the app to determine whether it is likely your connection is being held back by factors in the home, such as interference.” Once the Wi-Fi quality has been measured, the app then provides troubleshooting tips to help fix the problem.

There are plenty of simple ways to improve Internet speeds without requiring much technical know-how; who knew one of them was to be Ebenezer Scrooge?