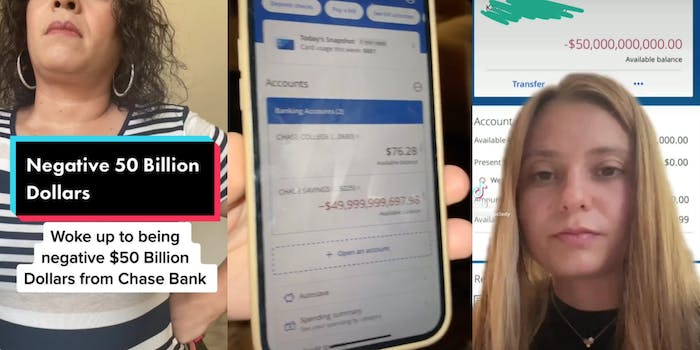 Account holders across social media began reporting the issue over the weekend.

TikTok users are claiming that a glitch involving Chase Bank is causing their accounts to appear as if they are $50 billion in debt.

The issue appears to have started over the weekend when screenshots and videos of the alleged glitch began to pop up online.

In one such video, TikTok user @thatcroclady claimed that she contacted Chase over the issue and was told that she would receive a response on either Monday or Tuesday.

In a follow-up video on Monday, @thatcroclady said the problem had begun to be rectified after her account balance was changed to $0.

Another TikTok users reported similar circumstances, showing video of her friend’s account being around $49 billion in the red.

“We went out to the bar and Maddie checked her phone when we got home and she’s -$50 billion dollars in debt,” @gabefloress said.

One user even filmed themselves calling the bank’s automated service to have their account balance read.

“Listen to this bullshit!” the woman in the video says. “This is Chase.”

Reports of the glitch weren’t just relegated to TikTok. Multiple users across Twitter also claimed to have experienced the multi-billion dollar issue.

While the majority of reports surrounded users appearing to lose money, at least one account holder claimed to have received $50 billion.

The Daily Dot reached out to both the bank’s customer support line as well as its press office to inquire about the alleged glitch but did not receive a reply by press time.

Such an issue would not be unprecedented. Just last year Chase admitted that a technical issue caused thousands of account holders to see incorrect balances as well.