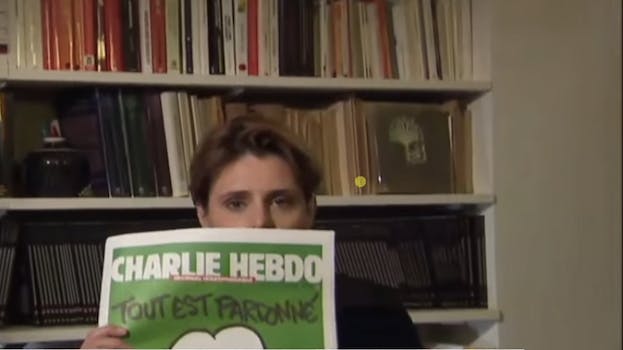 French shop owners had trouble keeping the latest issue of the satirical publication Charlie Hebdo on newsstands Wednesday. Lengthy pre-dawn lines were a common sight as eager Parisians jostled to get their hands on the magazine, the first print since 12 people were barbarously murdered at the magazine’s headquarters on Jan 7.

A YouTube video uploaded after the issue hit the stands captures the reaction of a news anchor at Britain’s Sky News after a guest tries to display Hebdo’s magazine on camera. Sky News is one of several news agencies that made the editorial decision not to show the controversial cover because of its potential to offend religious Muslim viewers.

With one alleged terrorist in custody and two others dead at the hands of police, conversation once again shifted toward the nature of the magazine’s work. Hebdo’s latest issue features a crude depiction of the prophet Muhammad holding a sign reading “Je Suis Charlie” (“I am Charlie”); a phrase that has become a rallying cry synonymous on the streets of Paris with the defense of free speech.

The decision by editors and staff of the world’s news agencies of whether to publish the cover of the latest Hebdo magazine or not was met by mixed reactions from the public. Those who didn’t were criticized for being “cowardly.” Those who did, which includes this publication, were likewise condemned, but instead for being needlessly offensive.

It’s your classic “rock and hard place” scenario. Of course, if what you’re reporting is making everyone happy 100 percent of the time, can you really even call it news?