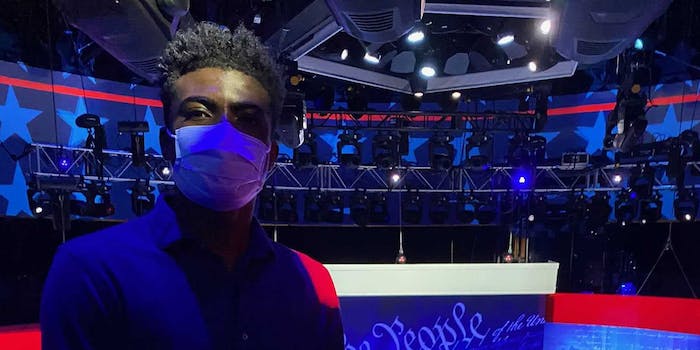 Cedric Humphrey called out the Trump campaign for using the viral clip.

At one of last week’s presidential town halls, Cedric Humphrey called out former Vice President Joe Biden for his May comments where he said “you ain’t Black” if you vote for Trump. The question quickly launched him into virality.

Humphrey, a University of Pittsburgh senior, describes himself as a progressive Democrat who isn’t happy with the presidential options. After ABC invited him to the town hall, he asked Biden what he would specifically say to young, Black voters who do not resonate with either candidate.

“Many people believe that the true swing demographic in this election will be Black voters under the age of 30. Not because they will be voting for Trump, but because they won’t vote at all,” Humphrey began. “I myself have had this exact same conflict. So my question for you then is, besides ‘you ain’t Black,’ what do you have to say to young Black voters who see voting for you as further participation in a system that continually fails to protect them?”

Minutes after the question, Humphrey went viral on both sides of the political spectrum. The town hall took place last week, but Humphrey told the Daily Dot his phone is still blowing up. He said he had “hundreds of text messages, and Snapchats, and Instagram follows, and Insta DMs, and Twitter DMs” from friends, family, and strangers in the days following the town hall.

But even amid the virality, Humphrey noticed that President Donald Trump’s campaign was using the clip to try and mock the Democratic presidential nominee and make it appear like Humphrey was a supporter of Trump.

“Cedric with some real talk for Joe Biden!” a Trump campaign account tweeted.

This isn’t the first time the campaign has tried to capitalize on Biden’s remarks. Shortly after Biden said that, the campaign began selling “#YouAintBlack” T-shirts for $30. The shirts were widely mocked.

Humphrey quickly shot down the Trump campaign’s tweet after he got onto his phone following the town hall, he said.

“Y’all me must’ve missed the ‘progressive Democrat’ part. Delete this and F off,” Humphrey wrote, quote-tweeting the Trump campaign’s tweet.

Much like his initial question to Biden, Humphrey’s response took off online. As of Tuesday morning, the post had nearly 20,000 likes.

Humphrey told the Daily Dot said he was not surprised that Trump’s campaign misconstrued his question.

“The Trump campaign very, very deliberately misleads people. They use misinformation as a campaign tactic,” Humphrey said. “I was just a little annoyed that they cut out the Trump part of my question and completely missed the fact that I am a progressive Democrat and would rather potentially explode than vote for Donald Trump.”

Humphrey said he was originally supposed to attend Trump’s town hall, but he declined the offer because he knew he wouldn’t be able to get his message across.

“One of the main reasons I backed out of the Trump town hall, besides that I’d have to be in the same room as him, is that I knew I wanted to ask a pointed question and I didn’t want it to get misconstrued or danced around,” Humphrey said. “[Trump] is a D1 athlete in dancing around questions and putting them back on you.”

So, he went to Biden’s because he “knew Joe Biden wasn’t going to do the same thing. Or as bad.”

News outlets reached out to him like Good Morning America and even a Danish Television station. CNN’s Don Lemon interviewed Humphrey on Saturday as well.

“Thank you @donlemon for allowing me to speak on your show tonight! With 16 days until the election I hope everyone votes for @JoeBiden. However, when he wins we must remain critical of the leader and hold him accountable,” Humphrey tweeted.

Although he says he will be voting for Biden, Humphrey said he was not impressed with his answer at the town hall.

“Yes, we would hope the presidential candidate would answer the question better than he did, but at the same time he gave me an answer that Donald Trump wouldn’t have given me,” Humphrey said.