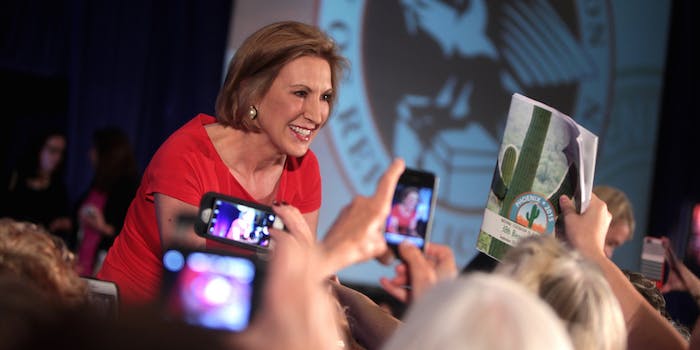 Video footage cited by Carly during Wednesday's debate has been widely discredited.

It was the crowning act of Carly Fiorina’s Wednesday night debate appearance, a moment in which she rose above every other personality on stage. With voice raised and furor in eye, the former HP chief executive boldly defended the right to life.

“I dare Hillary Clinton, Barack Obama to watch these tapes,” Fiorina said. “Watch a fully formed fetus on the table, its heart beating, its legs kicking, while someone says we have to keep it alive to harvest its brain.”

Thing is, Fiorina’s impassioned defense of life, the highlight of her entire evening, is based on a lie.

.@CarlyFiorina's Planned Parenthood response was one of the most tweeted moments of the #GOPDebate: pic.twitter.com/4QpJGp84HC

The video to which Fiorina referred does not exist, or is at least not among the several tapes released by the Center for Medical Progress in its months-long attack against Planned Parenthood, which aims to paint the women’s health organization as profiting from the sale of aborted fetuses.

The allegation that Planned Parenthood “profits” from “selling human baby parts,” as various GOP candidates claimed on Wednesday night, has been widely discredited by medical experts; and the videos, according to forensic analysis, have been “blatantly manipulated.” Words were not only removed conversations depicted in the footage, but added as well, from both the heavily edited and so-called “full footage” versions.

A transcript of one of the videos published by CMP, allegedly filmed in Texas, “contains over 4,000 words of dialog that does not appear” in the video, the experts found, substantially altering the meaning of single sentences, and thus entire conversations. Likewise, several thousand words heard on the hours long tape appear to have been intentionally omitted by CMP.

At no point in the some 12 hours of footage, however, does the scene harrowingly described by Fiorina actually happen.

The video to which Fiorina likely referred is indeed difficult to watch. In episode three of CMP’s “Human Capital” series, a fetus is shown lying in a cold steel bowl next to an umbilical cord clamp. For a split second, near the end of the footage, the fetus appears to moves its arm and leg.

A woman, who was interviewed at a later time, and whose voice was dubbed over the video, describes how a researcher at a bioresearch facility coldly plotted to harvest the fetus’ brain.

There is only one problem: The fetus shown in the video was not aborted by a Planned Parenthood doctor. In fact, it wasn’t aborted at all. It was a miscarriage. The mother, Alexis Fretz of Pennsylvania, posted her story online in a June 2013 WordPress blog. CMP even includes in its YouTube video’s description a link to the story—which cannot be seen when embedded on other websites—as if to stave off future allegations that it intentionally mislead its viewers.

Fiorina defended her remarks about Planned Parenthood Thursday morning on Good Morning America, telling George Stephanopoulos, “There’s a lot of commentary about these tapes being doctored. In fact, that’s what the mainstream media keeps talking about is the tapes and their origin. Rest assured, I have seen the images I talked about last night. Rest assure, human lives are being harvested.”

The fact that the video clip, with regards to its Planned Parenthood connection, has been widely discredited since it was first published on Aug. 19, leaves only a handful of conclusions for anyone examining Fiorina’s statements.

The 2016 presidential candidate is either uninformed, being misled by someone else, willfully ignorant, or she deliberately made use of a national stage to mislead the American public in furtherance of her own social agenda.

For Planned Parenthood, the answer is simple: Fiorina lied.

Planned Parenthood said in a statement on Thursday that Fiorina had been contacted directly by letter and asked to stop making false statements about its employees. The organization described her remarks during the debate as part of a “pattern of deception and dishonesty.”

“The images show nothing like what Carly Fiorina said they do, and they have nothing to do with Planned Parenthood,” Eric Ferrero, Planned Parenthood’s vice president of communications, said in a statement sent to the Daily Dot. “The video footage that she claims exists—and that she ‘dared’ people to watch—does not exist.”

“We have a word for that,” Ferrero said, “It’s a lie. And it’s not the first time Carly Fiorina has lied.”