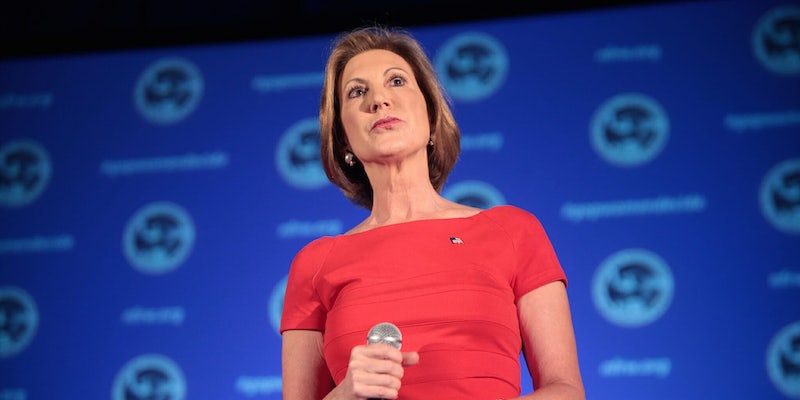 The person who uploaded the video did not confirm Fiorina's claims that it was linked to Planned Parenthood.

A video that apparently shows an abortion referenced by Carly Fiorina during the second Republican debate appeared on Youtube Tuesday morning.

Former Pennsylvania state Rep. Gregg Cunningham, who uploaded the video, told Time on Monday night that he would not identify the date or location of the procedure shown in the video. He also did not claim that it occurred at a Planned Parenthood clinic, as Fiorina suggested about the procedure she described.

“I am neither confirming or denying the affiliation of the clinic who did this abortion,” Cunningham said.

The video, which is extremely graphic, depicts a fetus being removed from a woman and placed in a metal bowl. The fetus appears to move several times and, as Time notes, appears to have a pulse. There is no indication that the people in the video planned to harvest its tissue or organs.

Fiorina, the former CEO of HP, drew a direct connection between a procedure apparently shown in this footage and Planned Parenthood at the Sept. 16 GOP debate.

“As regards Planned Parenthood, anyone who has watched this videotape, I dare Hillary Clinton, Barack Obama to watch these tapes,” she said.

“Watch a fully formed fetus on the table,” Fiorina continued, “its heart beating, its legs kicking while someone says we have to keep it alive to harvest its brain.”

The 13-minute video belonging to Cunningham, which is titled “Carly Fiorina was right,” contains no audio. No one can be heard issuing instructions to keep the fetus alive or to harvest its organs.

Fiorina defended her statements on NBC’s Meet the Press Sunday, telling host Chuck Todd, “That scene absolutely does exist, and that voice saying what I said they were saying—‘We’re gonna keep it alive to harvest its brain’—exists as well.”

In the video that Fiorina apparently watched, the audio to which she referred was added to unrelated video by the Center for Medical Progress, an anti-abortion group targeting Planned Parenthood. It was recorded separately during an on-camera interview with an alleged former “procurement technician” for a company that supplies human specimens to biomedical researchers.

David Daleiden, the project lead for the Center for Medical Progress, issued a statement the day after Fiorina’s debate appearance, clarifying that the “footage in question was… used to illustrate the first person eye witness testimony” of the technician.

In other words, there is no connection between the Cunningham video and the technician’s allegations, despite Fiorina linking them at the debate.

Fiorina took her allegations a step further on Sunday, insisting that Planned Parenthood isn’t merely collecting fetal tissue with patient consent and donating it for accredited medical research. According to Fiorina, “brain-harvesting” is a key motivation for Planned Parenthood offering its abortion services.

In fact, Planned Parenthood has specifically denied that charge.

“There is no polite way to say this: Carly Fiorina is lying,” Eric Ferrero, Planned Parenthood’s vice president of communications, told the Daily Dot. “It’s totally false, no matter how many times she repeats it.”

During an August interview with conservative radio host Hugh Hewitt, Fiorina called for Republicans to shut down the federal government if Democrats wouldn’t agree to pass a spending bill defunding Planned Parenthood.

According to Media Matters, during a Sept. 15 webcast hosted by “40 Days For Life,” CMP founder David Daleiden cited the work of “friend” Mark Crutcher, the founder of the anti-abortion group Life Dynamics, as the inspiration for his videos, which have sparked at least 11 state and four federal investigations into Planned Parenthood’s activities.

“The last time it was really in the public discourse or public eye was in the year 2000 when my friend Mark Crutcher and his organization Life Dynamics did their own very sophisticated, groundbreaking kind of seminal investigative expose of the practice of harvesting and selling aborted baby parts,” Daleiden said.

Daleiden attributed Crutcher’s work to an investigation by the ABC program 20/20, which featured a lab technician named Lawrence Dean Alberty, who claimed that Planned Parenthood was selling fetal tissue for profit.

Albert’s allegation triggered an FBI investigation that eventually cleared Planned Parenthood of any wrongdoing. A congressional investigation into the matter subsequently fell apart when Alberty admitted under oath that he had lied on 20/20 and that Crutcher’s organization had paid him more than $20,000.

Update 12:20pm CT, Sept. 29: After publication, Planned Parenthood identified the Cunningham video in a statement to the Daily Dot as originating from a website called the Grantham Collection. The website lists Cunningham’s organization, the Center for Bio-Ethical Reform, as a “lifetime partner.”

Slate writer Brian Palmer wrote of the organization in October 2010:

“In the late 1990s, a second major source [of abortion footage] emerged. The Center for Bio-Ethical Reform has compiled an extensive library of pictures and videos of fetuses and abortion procedures. The center pays doctors and clinics to permit a contract photographer to enter the operating room and document the abortion. Selling access to an operating room is unheard of in the United States, so it’s very likely that the center’s images were all taken abroad. The center won’t say whether it obtains the patients’ consent to snap pictures.”