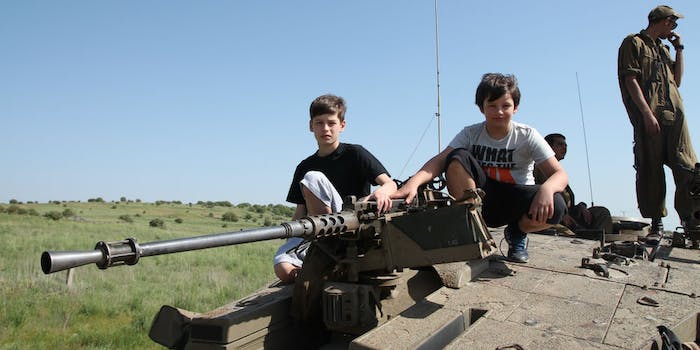 "If I showed them a silhouette of an MP5 Heckler and Koch they would tell me right away what it was. And that started worrying me."

Anyone who thinks military-themed first person shooters bear any relationship to reality are delusional. A Swedish man made sure his sons never fell for the delusion by taking them to Jerusalem.

Carl-Magnus Helgegren is a former system sciences and radio production instructor at Luleå University of Technology. He currently works as a programmer, and does contract work producing documentaries for Swedish national radio about Sweden’s experience with World War II, and has been a freelance journalist for 12 years.

When his sons Frank and Leo said over dinner in Nov. 2013 that they wanted to play the latest Call of Duty game, Helgegren reflected back to an experience he had in Ni’lin, a Palestinian town in the West Bank.

In 2009, when he was 28 or 29 years old—Helgegren can’t remember precisely—he joined a friend who was living in the city of Ramallah in Palestine, shooting documentaries and working in clubs as a DJ at night. The plan was to party, do freelance work, and see the Middle East.

Helgegren came under fire from Israeli troops while shooting photographs at a protest against the security barrier—or wall, depending on which side of the conflict you’re on—built by Israel. Israeli troops fired on the protestors with grenades that Helgegren believes were launched from assault rifle attachments, i.e. not as avoidable as tear gas hand grenades and their obvious plumes of smoke.

Helgegren felt like a target. A Palestinian man pointed out what he said was the blood of a 10-year-old boy shot dead in a previous demonstration. This is what Helgegren thought about as his sons talked about Call of Duty: Ghosts, the then-new game in the military-themed first-person-shooter franchise. They were 9 and 10 years old at the time. 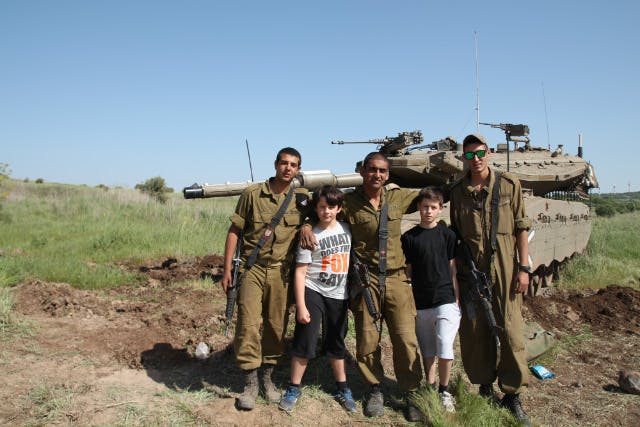 “As soon as they’re in a first-person-shooter game and they’re firing a weapon—and really the game is for an audience that is 16 years old—I think that I owe it to them to explain reality, before they play it,” Helgegren told the Daily Dot in a phone interview.

When Helgegren was younger he played first person shooter games like Doom, Wolfenstein, and Call of Duty. We asked whether Helgegren felt that he was being taught about war when he played them.

“I played Call of Duty 2, and that’s all about the second World War. And I thought it was pretty cool, with Stalingrad and the missions in northern Africa, but I couldn’t say that after having played it, that it actually had taught me anything,” Helgegren said. “I didn’t feel that it really enlightened me. I liked it because you could snipe people in the head, or shoot cannons.”

We asked whether, when his sons were talking about Call of Duty: Ghosts, Helgegren felt his sons were being taught anything about the nature of war, either.

“They were talking to me like it was a cool game, and everybody else was playing it, and it had all these cool weapons. Then I started asking them, ‘What kind of weapons are there?’ And they started telling me these, you know, brand name models of different automatic rifles,” Helgegren said. “And I was amazed that, ‘Oh my God, if I would show them the leaf of an oak [tree], they probably couldn’t tell me what tree it was, but if I showed them a silhouette of an MP5 Heckler and Koch they would tell me right away what it was.’ And that started worrying me.”

Helgegren cut a deal with his sons. If they wanted to play games like Call of Duty, they had to know firsthand what war is. Once they’d talked to people who had lost relatives, acknowledged that the people dying in wars aren’t just statistics, and saw the long-term scars on society from war, they could decide whether or not they wanted to play a game like Call of Duty.

Helgegren didn’t feel that he had learned anything about war from his own experiences with military-themed first-person shooters, and the version of Call of Duty he played was based on an actual war.

Call of Duty: Ghosts, on the other hand is a purely fictional story set in an alternate timeline where the United States is at war with an alliance of South American nations. We asked how Helgegren got from hearing his children talking about a fictional experience such as this, to thinking about taking them to the Middle East?

The last Call of Duty game set largely in the Middle East was Call of Duty 4: Modern Warfare, released in 2007. The franchise is currently running on a near-future theme. Call of Duty: Advanced Warfare, which will be released on Nov. 4, stars Kevin Spacey as the head of a private military firm and features drone swarms and mech-like tanks.

We noted the implication in Helgegren’s argument, that even if he didn’t think his sons had learned anything about war from Call of Duty, he thought they might. We asked him why.

“I don’t really know. Just because you play the games doesn’t mean you become a murderer, or you don’t get obsessed with war, but I felt that in the time of their life when they are the most receptive for learning new things, why would I let them spend hours a day playing games that are about shooting people?” Helgegren said.

Was the idea of taking the trip to the Middle East a preemptive measure, then?

“Just like I was when I was 28 or 29, before I went down to the Middle East, I thought I had an idea what war was like,” Helgegren said.  “Once I got there, and I wasn’t even in a war, I was in a demonstration, in an occupation, then I understood ‘I know nothing about this.’” 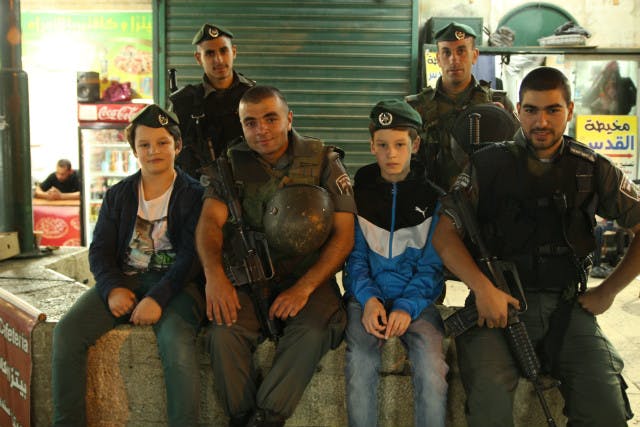 Helgegren and his sons left Sweden for Israel on April 11, and returned on April 21. They went to Jerusalem and visited with Israeli soldiers. They visited the refugee camp at Shuafat in East Jerusalem and saw the horrible conditions there, which Helgegren wrote about for the Swedish magazine Filter.

Helgegren has faced significant criticism since he and his sons returned to Sweden on April 21. Some of that criticism has revolved around a perceived lack of responsibility in regards to putting his children in danger. Helgegren told the Daily Dot that his children were never in anything resembling an active combat zone, or any environment in which they faced physical harm.

“The closest we were to combat was when we were up in the Golan Heights, we were 60 kilometers away from Damascus, in Syria,” Helgegren said. “We were right on the border to Syria. I had been there about six or nine months earlier, and when I was there we could hear the tanks in Syria firing at night, during the civil war that is still going on.”

Comments from a representative for Swedish Games Industry were supportive of his trip, while also stating that taking children to a war zone to confront their interest in video games was unnecessary.

“Video games in themselves are not bad,” Helgegren to the Local. “But in Sweden and Europe we are very privileged. We have all this wealth and rights and social services. And with that comes the responsibility to educate ourselves and not just become zombies playing video games and consuming hamburgers.”

So, while the impetus for the trip was a discussion with his sons about video games, the meaning behind the trip changed in Helgegren’s mind while they were there.

“It’s not only about the games. It’s also about understanding how privileged you are, just because you’re born in a certain country,” Helgegren said. “It annoys me that we have a generation of children in Sweden growing up not being aware of the luxury that they’re living in. One part of it [was] the game, and another part of it [was] understanding how privileged you are.” 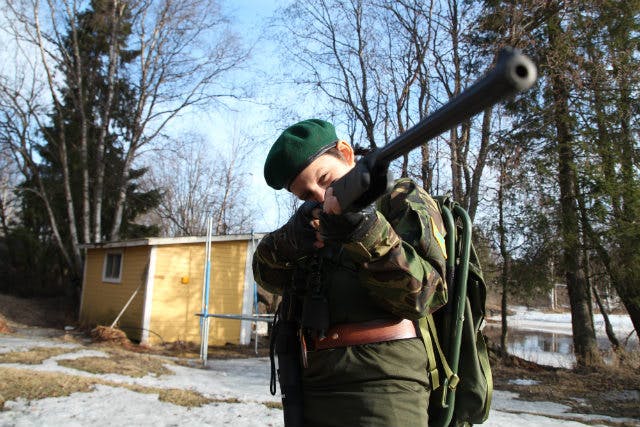 Helgegren’s sons have decided, since returned from the Middle East, that they are not going to play military-themed first-person shooters, though they still have an interest, Helgegren said. It wasn’t an immediate, decision, however. In the face of their father’s statements about how shooter games fund arms manufacturers (as reported on Eurogamer), sons Frank and Leo suggested pirating the game. That way, they wouldn’t be putting money in the hands of anyone making guns for the arms market.

“And then I say ‘At the same time, right now we’re sitting in this country where there hasn’t been war for centuries, and while you are playing your video games, shooting people, people are getting shot by the very same guns in Gaza or other places in the world.’ It leaves a bad aftertaste. Is that reasonable? Is that worth spending time on?” Helgegren told us. “And then we play FIFA, and role-playing games—we still play games—but we don’t play the war games.”

We asked whether, in the face of his making arguments like these to his sons, Helgegren had actually left them room to make their own decisions as to whether or not they wanted to play military-themed shooter games.

Helgegren acknowledged the concern, but said that he followed through on the deal he made with his sons. Having taken the trip to the Middle East, they were now free to decide whether or not they want to play Call of Duty, he told them at the dinner table back in Sweden.

“They just looked at each other and said ‘No, we don’t want to play them anymore,’” Helgegren said. “What Frank said to me, he said, ‘Now that we’ve seen all of this, it would feel very strange to say ‘Yes.’”