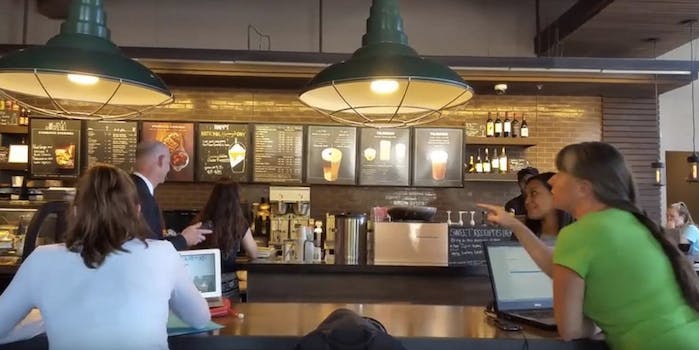 Florida woman cheered for ripping into Gov. Rick Scott at a Starbucks

Florida residents are calling her a hero for the viral rant.

There’s nothing quite as satisfying as telling someone off—especially when that person is the most powerful man in your state.

Such is life for Cara Jennings, a Lake Worth, Florida, resident who is quickly becoming famous online for giving Gov. Rick Scott a piece of her mind at a Starbucks in Gainesville.

A video posted to YouTube on Tuesday by Stephen Bender captures Jennings laying into the Florida governor for his refusal to expand Medicaid, a key component to the Affordable Care Act (Obamacare) on the state level, as well as the restrictive anti-abortion bill Scott signed on March 25 that stripped Planned Parenthood of state funding.

“You cut Medicaid so I couldn’t get Obamacare,” Jennings yelled. “You’re an asshole. You don’t care about working people. You should be ashamed to show your face around here.”

Jennings brushed off Scott spokeswoman Jeri Bustamante with a quick “I’m not talking to you” before the governor responded by saying, “We’ve got a million jobs.”

“A million jobs? Great, who here has a great job,” Jennings responded. “Or is looking forward to finishing school? You really feel like you have a job coming up?”

The exchange continues as Scott and his entourage exit the coffee shop without their coffee.

“You stripped women of access to healthcare. Shame on you, Rick Scott,” Jennings continued as the governor sped out of the cafe. “We depend on those services. Rich people like you don’t know what to do—when poor people like us need health services, you cut ’em. Shame on you Rick Scott! You’re an embarrassment to our state.”

A former Lake Worth commissioner, Jennings first appeared in the public eye in the 1990s as a founder of the activist performance art troupe Radical Cheerleaders. [Full disclosure: I was a member of Radical Cheerleaders and know Jennings personally.] She later made news as the first self-proclaimed Anarchist to be elected to public office in Florida when she won her campaign for city commissioner in 2006. A 2010 feature in the Broward-Palm Beach New Times described Jennings’ collective house as an “underground railroad of anarchists” and noted the clashes with local politicians and conservative bloggers that her outspoken protests often raised.

“It started out very calm. I saw his profile, and wasn’t sure if it was him,” Jennings told the Daily Dot in a phone interview. “So, I just said ‘governor Scott,’ and he turned towards me. I asked, ‘Why did you pass that awful law last week that impacts women’s healthcare choices?’ and he said, ‘I don’t vote on bills,’ which is so incredibly disingenuous. If I didn’t understand the political process, at that point I would have thought, ‘Oh I got the information wrong,’ and I would have dropped it.”

On Facebook, Jennings explained that the governor’s anti-abortion bill was what instigated her impromptu Starbucks rant.

According to a YouTube comment Stephen Bender left under the video he shot, Jennings had first yelled at Scott about the abortion issue—but he hadn’t started recording yet.

On social media, Floridians and healthcare advocates around the country are applauding Jennings for the rant against Scott, who has an approval rating of 38 percent in the state, according to recent polls.

Her name is Cara Jennings and she's my new hero!!! – Governor Rick Scott shamed, run out of Starbucks. https://t.co/y2Q8SU6ESj @FLGovScott

in a way, we are all yelling at Rick Scott in a Starbucks

This woman is an American hero https://t.co/1xWYk77VnJ

Scott’s office did not immediately respond to a request to comment on Jennings’ criticisms or the public’s response to the video.

Scott’s signing of Florida HB 1411 into law disappointed many reproductive-rights advocates in the state. The bill, similar to one in Texas that is currently being reviewed by the Supreme Court for possible constitutional violation, mandates that abortion clinics adhere to stringent rules regarding licensing, applications, fees, and hospital admitting privileges. It also blocks any state funding from going to clinics or doctors who also provide abortion services.

The bill has been called a direct response to the controversial (and now-debunked) Planned Parenthood videos circulated by anti-abortion activist David Daleiden and the Center for Medical Progress. After the videos emerged, reported the Orlando Sentinel, Scott ordered the state health agency to investigate clinics across the state in a search for mishandling of fetal remains. The health agency found no evidence of fetal tissue sales.

“As a result of this bill, thousands of people across Florida may no longer be able to access essential reproductive health care, such as cancer screenings, birth control, and well-woman exams,” Planned Parenthood president Cecile Richards told the Orlando Sentinel after the bill’s signing. “This cruel bill is designed to rip health care away from those most at risk.’’

“People with radical views tend to not like civil debate. A self-proclaimed anarchist rudely yelled and cursed at the governor,” Sellers said. “She also refused to pledge allegiance to the flag. It’s a free country, but it’s not at all surprising that an anarchist prefers shouting over conversation.”