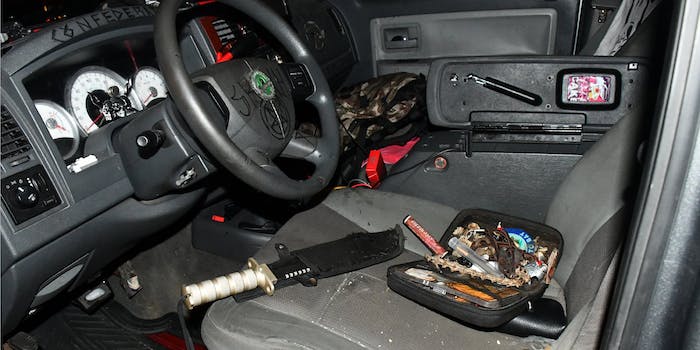 Police said the man said he was 'on patrol' near the DNC.

U.S. Capitol Police arrested a California man who had multiple knives inside a pickup truck that was decorated with numerous hate symbols. He was detained near the Democratic National Committee (DNC) headquarters.

Donald Craighead, 44, was charged with possession of prohibited weapons. The Capitol Police said an officer noticed a Dodge Dakota pickup truck that had a swastika and “other white supremacist symbols painted on it” near the DNC headquarters around midnight on Monday.

Photos from inside the pickup truck released by the Capitol Police show a machete inside the car. “Confederate” was written on the dashboard, and swastikas were drawn on the rearview mirrors and inside the car.

The photos also shows what appears to be a large joint inside a canister and the back license plate covered by an American flag. What look like antlers can also be seen sticking out of the front of the car.

The Capitol Police said inside the car they found a bayonet and machete, which are illegal in Washington, D.C.

After being pulled over, the Capitol Police said Craighead spoke about being “on patrol” and talked about “white supremacist ideology and other rhetoric pertaining to white supremacy.”

As ABC News notes, on Saturday a “Justice for J6” rally is being organized. The rally is reportedly to support people who have been charged in connection with the Jan. 6 Capitol riot, where supporters of former President Donald Trump stormed the Capitol building in a failed attempt to stop the certification of the 2020 election.

The Capitol Police said it was “not clear” if Craighead was planning on attending “any upcoming demonstrations or if he has ties to any previous cases in the area.” However, CNN reports that the Capitol Police put out an internal memo about the potential for violence during the rally.