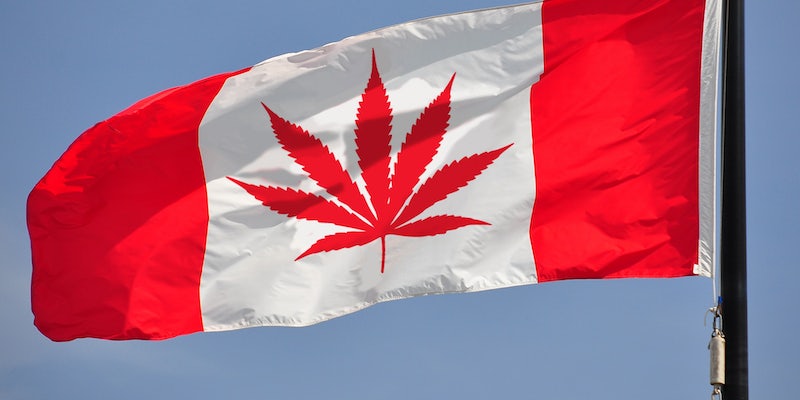 Justin Trudeau could put Canada on the path to full legalization.

Justin Trudeau, the son of former Prime Minister Pierre Trudeau, rose to power Monday night as prime minister under the Liberal Party, which earned its first majority in a general election in 15 years. Outgoing Prime Minister Stephen Harper conceded defeat and stepped down as leader of the Conservative Party.

Since the Liberals have promised to legalize marijuana, the big conversation on Tuesday is about the country’s burgeoning pot business. Marijuana sales from licensed producers are currently limited to less than 30,000 medical patients; if the drug is legalized, however, the same cannabis growers could see millions of additional customers—some of whom are already lighting up in celebration.

According to their platform, the Liberals plan to legalize marijuana for recreational use, while forming a regulatory system to manage it and a justice system to keep it out of minors’ hands. “Canada’s current system of marijuana prohibition does not work,” the platform says. The Liberals also say their legalization plan will remove proceeds from “the illegal drug trade” that support “organized crime and greater threats to public safety, like human trafficking and hard drugs.”

Legalization of marijuana in Canada would likely put added pressure on the United States, both in the form of renewed efforts to legalize weed at the federal level as well as greater emphasis on policing at the northern border. It would also complicate a number of international treaties that require signatory countries, the U.S. chief among them, to keep marijuana illegal.

Trudeau, who admits he “had a puff” with some friends one time, hasn’t committed to a timeline for legalization. Speaking to a crowd in Surrey, B.C., earlier this month, however, he said the Liberal government would get to work on it “right away.”

Trudeau offered further insight in September, adding that—since his primary focus is to “make it more difficult for young people to access” marijuana—allowing the drug to be sold at “corner stores” didn’t seem reasonable. “I don’t think that corner stores necessarily are rigorous enough in checking ID to make me comfortable with that as an option,” he said.

The news of Trudeau’s victory has marijuana enthusiasts celebrating. On Reddit‘s popular r/trees community, users congratulated Canada for the political victory while remaining cognizant of the need to not turn non-smokers against legalization.

“Canadients we deserve legal weed, but let us make damn sure that we continue to deserve that legal weed by being respectful and responsible in our celebrations,” wrote user marcus_2002 in the post’s top comment. He added that pot smokers should not annoy their neighbors, never drive stoned, and “spread the love without trying to sound like you’re spreading propaganda.”

In addition, the Liberal party’s overwhelming majority (184 seats vs. the Conservatives’ 99) has provided Trudeau with a clear mandate to toss out Harper’s budget restraints. The Liberals are pushing instead a C$25-billion ($19-billion) deficit over three years to prop up Canada’s $2-trillion economy, still languishing from a collapse in the price of crude oil, the country’s largest exploit.

Photo by abdallahh/Flickr (CC BY 2.0) | Remix by Jason Reed