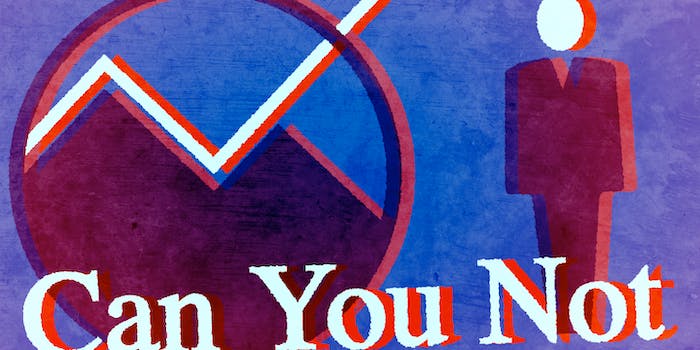 It started as a joke. Now it's so much more.

That’s the message a new political action committee has for straight white men looking to run for office.

“While there are amazing groups doing great work to recruit and support women, people of color, and LGBTQ folks who are running for office,” Can You Not PAC’s website reads, “there was one small thing missing:” A group to challenge “well-represented white dudes” to “reject any notion that they are uniquely qualified or positioned to seek political office in districts that don’t need them.”

The Denver-based PAC, first registered this week, was started by two 20-something white men who describe themselves as “Democratic operatives.” The duo seeks to combat the “epidemic of overly confident, under qualified white dudes crowding out America’s elections” in two ways. First, by having conversations with white men in politics about using their time and passion to support minorities running for office, instead of running themselves. Second, by collecting PAC funds and having a diverse advisory board select endorsements and (dis)endorsements before the June primaries and November election.

“It is likely that we will focus on districts where white dudes are challenging some of the best women of color in majority black or brown districts,” co-founder Kyle Huelsman tells The Daily Dot via email.

Though Can You Not PAC started as a joke, the pair is now completely serious.

“We work in politics for one real reason—to bring everyone’s voice to the table,” says the PAC’s other c0-founder, Jack Teter. “If I’m a Democratic operative and I want the most progressive policy possible and data tells me that progressive policies do better when there are more women and people of color and LGBT folks in office, why would I run against those folks except to feed my own ego?

“We’re not telling white men to stop working in politics,” Teter continues, “we’re asking them to stop assuming that they’re the best voice to represent their communities. … It is the absolute obligation of people in positions of privilege to dismantle oppressive power systems. It is the job of white people to fight racism. It is the job of straight allies to stop passing bathroom laws like HB2. That’s what allyship looks like.”

In the past 24 hours, Can You Not PAC has raised $1,400, as well as the ire of people Huelsman and Teter identify as white supremacists and generally angry white people. They highlight a representative Facebook comment in an email…

…and offered the following response to Zweiacher:

Correction: The answers we received from Can You Not were sometimes said by a different person than the one who emailed them to us. That was not mentioned in the email, resulting in misattribution.