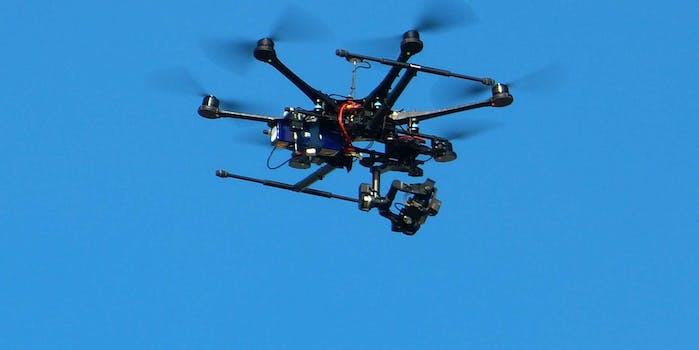 "It's disappointing that the governor decided to side with law enforcement in this case over the privacy interests of California."

Over the weekend, California Governor Jerry Brown (D) vetoed a bill that would have placed significant restrictions on the ability of law enforcement officials in the state to use drones for surveillance of Golden State residents.

The bill, which was initially introduced last year and was approved by State Senate last month, would have prohibited agencies in the state from conducting drone surveillance without first obtaining a warrant signed by a judge. It also mandated that any videos or still images obtained from drones be destroyed after a year. The legislation’s proponents hoped the restrictions would stop police officers and other government law enforcement officials from using drones to conduct widespread, airborne data collection—indiscriminately collecting as much material as possible and then deciding what to do with it later.

“There are undoubtedly circumstances where a warrant is appropriate,” Brown said to the state’s Assembly. “The bill’s exceptions, however, appear to be too narrow and could impose requirements beyond what is required by either the Fourth Amendment or the privacy provisions in the California Constitution.”

In addition, the bill would have banned law enforcement agencies from equipping drones with weapons of any kind.

Brown found the bill too restrictive, even though it contained a number of major exceptions to warrant requirements. Not only did it exclusively apply to law enforcement agencies, meaning the California Department of Transportation could use drones to research traffic without first checking with a judge, but it also built in a loophole for emergency situations, like forest fires and hostage negotiations, that officials would need to respond to immediately.

“We’re increasingly living in a surveillance society as the government uses new technology to track and watch the activities of Americans,” Assemblyman Jeff Gorrell (R- Camarillo), who introduced the bill, told the Los Angeles Times. “It’s disappointing that the governor decided to side with law enforcement in this case over the privacy interests of California.”

Unsurprisingly, the legislaton was supported by civil libertarians but opposed by law enfocement groups.

At the national level, law enforcement agencies have wide leeway to conduct surveillance with drones. A 1989 Supreme Court cast affirmed citizens don’t have a reasonable expectation of privacy when it comes to aerial surveillance. Therefore, law enforcement officials don’t need a warrant to take pictures from the air, just as they don’t require one when conducting surveillance on a public street.

This drone bill veto is not the first time Brown has blocked legisation aimed at putting safeguards in the way of police officers obtaining potentially sensitive information on citizens. Last year, he vetoed legislation that would have made law enforcement officials get a warrant before accessing electronic communications, such as email or instant messages, from online service providers like Google or Twitter.