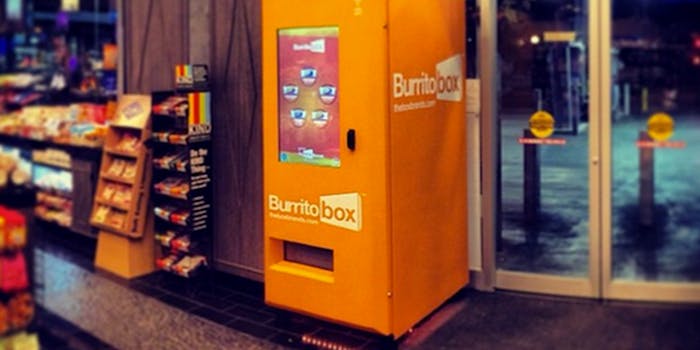 We’ve all eaten lunch from a vending machine at some point in our careers. I usually go the stale crackers and a diet soda route.

But what if you could get a piping hot burrito without using a microwave or leaving your building? A company appropriately named BurritoBox launched its first burrito vending machine in Los Angeles earlier this month. It opened a second location Saturday night, lavishing the people of Santa Monica Boulevard with free burritos in a clever marketing move.

While the concept and friendly design of the kiosk are enticing, it’s probably a good idea for the company give customers a test drive. It might help them get over the initial “ick” factor associated with vending machine food. But, this is the future afterall, and mankind may have advanced to the point when vending machine burritos are not only available, but delicious.

we didn’t get the hoverboard, but this is more important. bless you @Burritobox #thefutureishere pic.twitter.com/LMvDC5wfcz