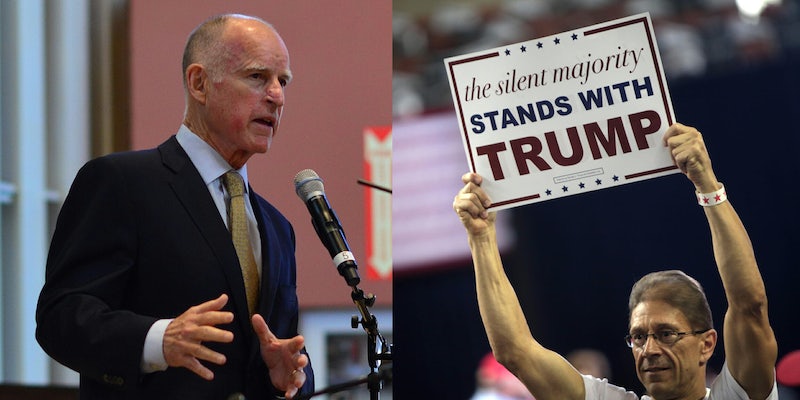 Brown made the remarks at a climate change event in New York.

California Gov. Jerry Brown had sharp words for President Donald Trump and his supporters on Monday, comparing the #TrumpTrain to cave dwellers.

Speaking at a climate change event in New York, Brown called Trump’s approach to North Korea and the changing climate “stupid and dangerous and silly” before turning his focus to supporters of the president, Politico reports.

“They’re both kind of very similar,” Brown said. “You should check out the derivation of ‘Trump-ite’ and ‘troglodyte,’ because they both refer to people who dwell in deep, dark caves.”

Brown has been at the forefront of trying to persuade states and cities to join efforts to combat climate change in the wake of the president’s announcement that the United States would withdraw from the landmark Paris Climate Accord.

In June, Brown announced that California had teamed up with China to combat climate change and to created “cooperation on the development of green technology.” The agreement would focus on producing zero-emission vehicles, energy storage methods, grid modernization, and low-carbon urban development. The agreement would also focus on lowering greenhouse gas emissions and air pollution.

“Everything he’s doing is … stupid and dangerous and silly. I mean, come on, really, calling the North Korean dictator ‘Rocket Man’? … He is accelerating the reversal through his own absurdity,” Brown said, adding, “These other powers are going to gang up on Mr. Trump, and he’s going to find out, ‘You’re fired.’”

Read all of Politico’s report here.