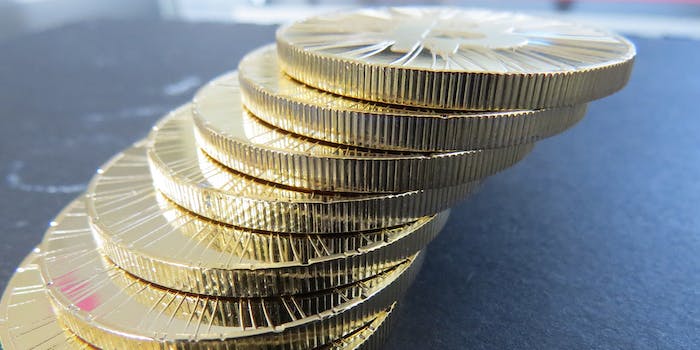 As Scotland votes on independence this summer, one store North of the border has ditched the British pound four months early. For three days a week, customers of the Glasgow branch of Computer Exchange (CEX), a chain of pawn shops, can only pay in Bitcoin.

A small but growing number of stores in the U.K. accept payment in Bitcoin (like trendy burger stands in London), but this is the first time a major retailer has banned the country’s official currency in favour of virtual money. Managers have even set up ATM-like machines in-store that convert banknotes into Bitcoins and place them in a virtual wallet. The prices of the retailer’s games and technology items also change according to fluctuations in value between the pound and Bitcoin.

While banning the pound is a canny publicity stunt for the controversial business, the bosses claim there are legitimate doubts over the future of the U.K.’s monetary union if Scotland votes for independence in September, as polls increasingly suggest it might.

“A big question on a lot of people’s minds in Scotland is whether we are going to be allowed to keep using the pound or whether we will join the Euro if we become independent,” Andy Wood, senior manager of CEX, told the Daily Express. “So it gives us an opportunity to try out a new form of currency.”

In February 2014, Icelanders created their own virtual currency, Auroracoin, as a response to the government’s monetary policies. Meanwhile, nobody knows what kind of money Scotland will be using if it votes in favor of the increasingly tight-looking referendum. With the pound and the euro hardly an enticing prospect at the moment, there may be a lot more shops North of the border that decide a decentralized virtual currency is the way forward.