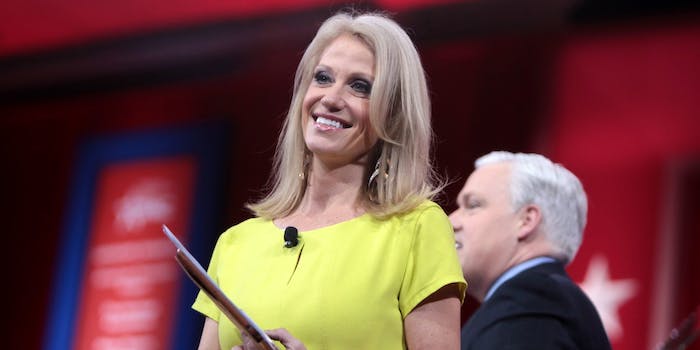 Conway's interviews are always an adventure.

White House adviser Kellyanne Conway took to the airwaves Sunday morning to debate the merits of President Donald Trump’s presidency with CNN’s Brian Stelter, and the result was a testy, hostile, combative interview that saw the Reliable Sources host tell her to stop spreading “misinformation” on his show.

The interview began with some jousting over the fairness of Stelter’s introductory question, in which he asked Conway how the White House planned to turn around Trump’s sagging poll numbers. Conway retorted that the real numbers that matter to the American people are jobs numbers and stock market closings.

“That’s not credibility,” Stelter replied. Conway retorted, insisting that it was credibility and setting off the testy tone that would persist throughout the interview.

Stelter also likened Conway’s attitude, picking out positive economic indicators and focusing on them while ignoring Trump’s historic unpopularity with the American public as being like a doctor telling a cancer patient they should be glad their arms and legs work.

“I’m not going to buy into that awful analogy, because I know many people with terminal cancer right now, so I think it’s a terrible analogy you’ve offered to the viewers,” Conway said. “I know there’s a lot of hand-wringing in the mainstream media that the country doesn’t need you anymore to spin and filter what the president just said …”

“I don’t think that you can find a more transparent, more forthcoming president in recent times that is engaging with the media,” Conway said. “And usually spontaneously. I mean, isn’t that refreshing?”

.@brianstelter to Conway: "That's misinformation that you're spreading on my program" https://t.co/kj79lE0dLT

The most pointed back-and-forth of the interview, however, was about the Russia investigation and the related dossier produced by former MI6 intelligence officer Christopher Steele which has been hugely controversial since it was released by BuzzFeed earlier this year. Some elements of the dossier remain unverified, while others have been corroborated and confirmed through investigation, reporting, and testimony. Conway, however, started the roiling argument by claiming that the dossier is “completely unverified,” leading Stelter to cut in.

“Parts of it has been verified. That is misinformation that you’re spreading on my program Kellyanne, and I don’t appreciate it,” Stelter said. “You just said the entire dossier’s unverified. That’s inaccurate.”

“Parts of the dossier have been verified, and when you say it’s unverified, you actually mislead the American people. Carter Page actually confirmed another part of the dossier on Friday,” Stelter said, referring to the former Trump campaign adviser’s testimony before the House Intelligence Committee on Friday. Carter reportedly confirmed that he’d met with Russian government officials during a July 2016 trip to Moscow.

Conway, however, was undeterred.

Trump’s orbit of advisers and strategists have, throughout his presidency and dating back to his campaign, employed a badgering, scorched-earth style when talking to the media, particularly CNN. It’s a style Conway herself has been a visible practitioner of, and in the midst of her many TV appearances throughout the past year, she’s been caught in a number of embarrassing falsehoods, most memorably her remarks about a nonexistent terrorist massacre in Bowling Green, Kentucky earlier this year.

Trump himself has routinely attacked CNN as a “fake news” outlet and has insisted allegations of collusion or coordination between his campaign and the Russian government are a “ruse.”