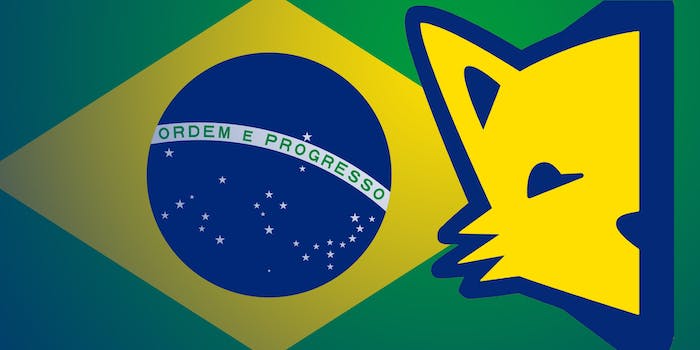 Brazil shines a spotlight on Secret.

Secret-sharing app Secret may soon be banned in Brazil over cyberbullying concerns, 9to5Mac is reporting.

The confessional app allows users to post anonymous messages to their contacts—and like its rival app Whisper, it’s widely used to spread everything from tech industry gossip to salacious stories, though it’s worth noting Whisper employs an algorithm that strikes down proper names not in the public interest.

Secret has been criticized before on the grounds that its anonymity encourages cyberbullying—and it now appears the Brazil may finally have had enough.

The Brazilian authorities aren’t targeting Secret directly: Instead, a prosecutor is looking to force Apple and Google to remove the app from their respective app stores.

Both Google and Apple have the technology in place to remotely deactivate apps from users’ phones, even without user consent. Google has used their “kill switch” in the past, but as Business Insider points out, Apple has never before done so.

If the ruling passes, Apple and Google will have a 10 day grace period—after which point they will be fined 20 thousand Brazilian Real, or $8,832, for every day that the app remains available. Apple Insider reports that the impetus for legal action was a “case in which marketing consultant Bruno Machado found nude photos published to Secret with overlaid text saying he is HIV positive.” Secret has previously been controversially accused by a campaigner of being “too busy raising money to care” about teen suicide.

Brazil isn’t afraid to take on apps it disagrees with. In January, Brazil banned Lulu, an app that allows women to anonymously rate men without their consent, allegedly because this violation of privacy was “unconstitutional.”

Online cyberbullying has been a hot topic recently: Ask.fm—a Q&A website notorious for being implicated in the death of a British teenager in 2013—has just been bought by IAC-owned Ask.com. Immediate reforms are promised, and Ask.com’s CEO told Pando Daily that “we’re not going to run a bullying site… If we can’t [fix Ask.fm], we’ll shut it down.”