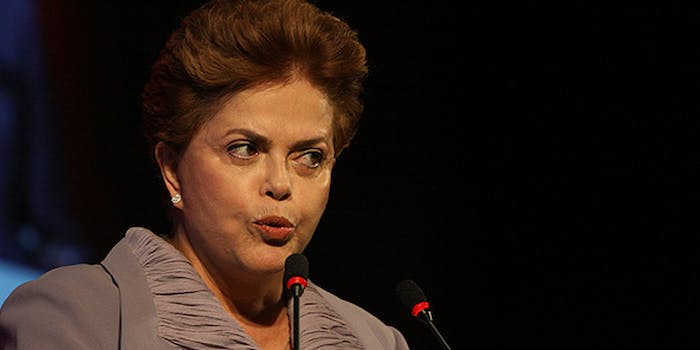 Yesterday, Brazilian President Dilma Rousseff took to Twitter to announce the creation of a secure email system for the federal government—one that intelligence agencies in the U.S. and other foreign nations won’t be able to access as they have in the past.

Rousseff ordered the Federal Data Processing Service (SERPO), a division of Finance Ministry, to develop a secure network for communication between employees of the state, citing “possible espionage” and the need to extend “the privacy and inviolability of official posts.” The system may be tested as soon as the end of the month; SERPO is also designing a version that will be made freely available to the Brazilian public.

The president has every reason to be concerned about spying: one thing Edward Snowden’s NSA leaks confirmed was that the NSA had been monitoring her email communications, as well as those of her colleagues and semi-public international oil and gas behemoth Petrobas SA. In September, she seized an opportunity to condemn the United States’ attack on Brazilian sovereignty as the opening speaker at the U.N. General Assembly. A week before, she had canceled an October state visit to Washington.

All hope for diplomatic harmony is not lost, however: Rousseff proposed a body designed to govern the Internet on a global scale, and in April her country will host an international conference on that same topic. Now that is the sort of conversation the U.S. should be listening in on.