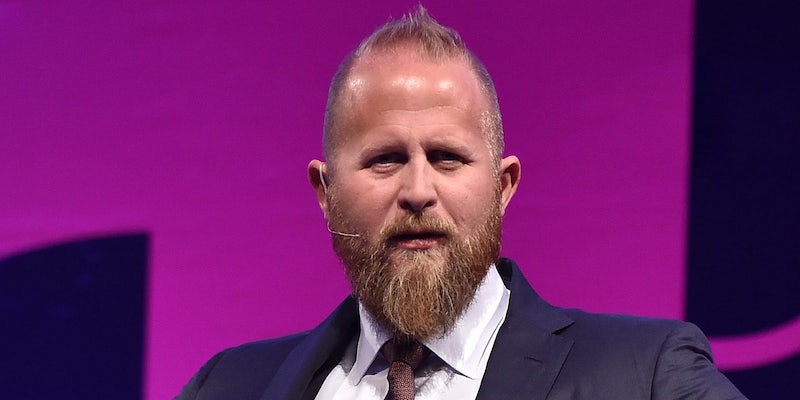 On Tuesday, President Donald Trump shattered political norms by announcing his reelection campaign and naming a campaign manager only a year into his presidency. Brad Parscale is an important but quiet figure in the Trump orbit and is undoubtedly one of the reasons that the Donald is sitting in the Oval Office right now. Here’s everything you should know about him.

Who is Brad Parscale?

Brad Parscale, 41, didn’t enter the Trump universe through the normal avenues, which tend to be New York elbow-rubbing and appearances on The Apprentice. Instead, the Trump Organization reached out to him in 2011 and asked him to create a website for one of Trump’s real estate projects, according to CNBC. Fox reports that the email came in 2010. But he must have impressed Trump because, in 2015, he got another email. This time the Trump campaign wanted him to design a website for the soon-to-be candidate.

Parscale told 60 Minutes that he agreed to put together the Trump campaign website for a fee of $1,500. By the end of the campaign, Trump’s team had forked over $94 million to Parscale’s company. Much of that money was spent on ads, primarily on Facebook.

While Parscale looks more like a backup guitarist for Father John Misty than a political operative, his attention to detail while aboard the Trump campaign was tireless. Initially, he was working in San Antonio but as he began to lead the Trump campaign’s online presence, he took on a much larger role.

Trump’s decision to name Parscale as his 2020 campaign manager was a shock in that the announcement came so early into his presidency. But the move to tap Parscale was hardly a surprise. The president’s daughter-in-law, Lara Trump, has been heading up his reelection effort, but she was hired by Parscale Strategies in March 2017. The firm was already partnered with America First Policies, which was already working to re-elect Trump after his inauguration. Parscale was a member of that team. Rick Gates, who has recently been indicted by Robert Mueller’s investigation, was also involved with America First Policies.

2020 is a far-away finish line for the Trump team. During the 2016 campaign, Trump dispensed with Corey Lewandowski, then Paul Manafort, before finally settling on Steve Bannon. Which begs the question that many are asking: Can Parscale last a full three years?

How Brad Parscale used Facebook to win Trump the presidency

The digital media guru quickly realized that Facebook could propel Trump into the presidency, and he was eager to learn all the tricks of the platform. He told 60 Minutes that he even installed Facebook employees in his offices, saying, “I asked each one of them by email, I wanna know every, single secret button, click, technology you have. ‘I wanna know everything you would tell Hillary’s campaign plus some. And I want your people here to teach me how to use it.’” He claims that his team put together 50,000 to 60,000 Facebook ads every day.

And it worked. Parscale estimated that his outfit spent 100 to 200 times less than Clinton’s digital marketing team by using ads targeting hyper-local groups. Those were demographics that would never have warranted the big-budget of a television commercial but could easily be targeted by Facebook’s advertising platform. One unnamed campaign veteran told BuzzFeed that Parscale “really became the campaign manager.”

Parscale shies away the spotlight, at least when it comes to the White House. That’s a wise move by a president who is famously irked by his aides getting more attention than him. When Parscale learned that BuzzFeed was putting together a profile of him last summer, he made a series of on-the-record remarks that were clearly intended to downplay his role. The bearded digital wizard told the website “maybe my job made 0.1% of difference, but Donald Trump did 99.9% of the work.” For good measure, he added, “Donald Trump won the campaign, and I was empowered by Jared Kushner and lucky to be around people like Kellyanne Conway and Steve Bannon.”

While Trump’s new campaign manager has a lot of plotting to do between now and 2020, he’s lucky to be out of the spotlight. Part of the reason is that he’s never entered the Mueller conversation that has haunted the White House, even as the Mueller team has indicted a number of former campaign aides like Paul Manafort, Rick Gates and George Papadopoulos. But Parscale has been called in to testify before the House Intelligence Committee about his role in the campaign, and the Senate wants to speak with him as well.