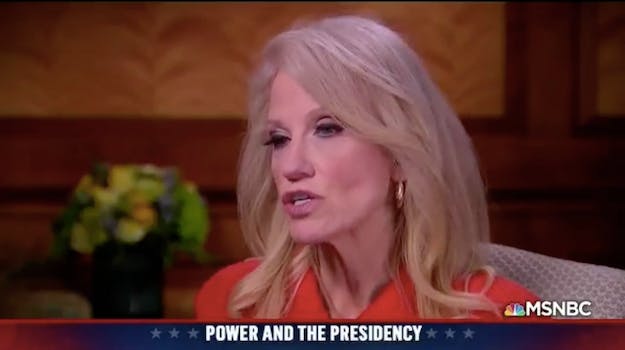 The internet was stunned Thursday night after presidential advisor Kellyanne Conway invoked the “Bowling Green Massacre,” in an attempt to justify a controversial travel ban imposed by the White House on seven majority-Muslim nations.

Stunned because it never happened. The Bowling Green Massacre is not an actual event.

“I bet it’s brand new information to people that President Obama had a six-month ban on the Iraqi refugee program after two Iraqis came here to this country, were radicalized and they were the masterminds behind the Bowling Green massacre,” Conway said during an appearance on Chris Matthews’s Hardball.

“Most people don’t know that because it didn’t get covered,” said the former Trump campaign manager, who is now a counselor to the president, regarding the deadly terrorist attack on American soil that she invented and never actually occurred.

.@KellyannePolls says that 2 Iraqi refugees "were the masterminds behind the Bowling Green massacre."
(There was no such massacre.) pic.twitter.com/sD3Nnb5xfE

Conway brought up the make-believe massacre as a way to explain the necessity of the travel ban imposed by the White House one week ago via executive order. The ban forbids entry into the U.S. by legal residents and refugees of seven Muslim-majority states, including Iran, Iraq, Libya, Somalia, Sudan, Syria and Yemen.

It’s impossible to tell if the ban has prevented any extremists from entering the country, but on Tuesday border agents did detain a former Norwegian prime minister at Dulles airport outside Washington D.C., the same airport where a 5-year-old Iraqi child, whom the White House referred to as a “security risk,” was also placed in handcuffs.

It’s possible that Conway—who coined the phrase “alternative facts” while describing an entirely fictional scenario in which President Trump’s inauguration audience was the largest ever—may have been referring to a 2011 incident in Bowling Green, Kentucky, in which two Iraqi citizens were arrested on federal terrorism charges. But no one in Bowling Green was killed.

Following their arrest, Mohanad Hammadi and Waad Alwan admitted to “using improvised explosive devices (IEDs) against U.S. soldiers in Iraq and attempted to send weapons and money to al Qaeda in Iraq,” according to a U.S. Justice Department press release. Hammadi received a life sentence while Alwan was sentenced to 40 years in federal prison.

The Associated Press reported at the time: “Neither is charged with plotting attacks within the United States, and the authorities said their weapons and money did not make it to Iraq because of a tightly controlled undercover investigation.”

One still shudders to think how bad the Bowling Green massacre would've been if not for the heroic intervention of Fred Douglass.

The Bowling Green Massacre was a Pin-side job

To be fair, Kellyanne’s was not the only major historical gaffe out of the White House this week.

Earlier on the Thursday, White House Press Secretary Sean Spicer blamed Iran for “actions that it took against our Navy vessel,” referring to an attack on a Saudi frigate—not a U.S. ship—which was not actually carried out by Iran at all, but Houthi rebels out of Yemen.

On Wednesday, President Trump appeared either not to know who Frederick Douglass was, or was otherwise convinced the former slave turned statesman, who died in 1895, was still among us.

Update 7:55am CT, Feb. 3: Kellyanne Conway took to Twitter this morning to share a story about the arrests of Iraqis in Bowling Green, Ky. She also seemingly admitted she misspoke.

READ: Bowling Green Terrorists: Al Qaeda in KY: US May Have Let 'Dozens' of Terrorists Into Country as Refugees https://t.co/nB5SwIEoYI

2/2: yet won't name him, attack him, get the base 2 descend upon him. Same with MLKJr bust fake story. It's called class, grace, deep breath