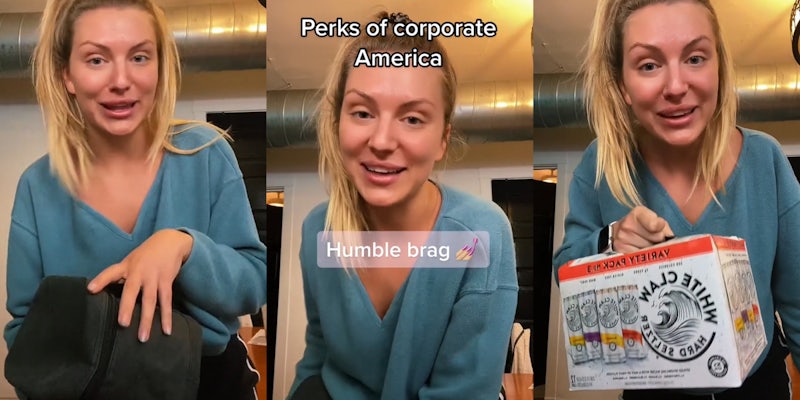 ‘Oh to be a decent-looking, young, Caucasian woman’: Boss sends White Claws to his female employee’s house after she said she liked them, sparking debate

A woman describing herself as a “personality hire” on TikTok has sparked debate after claiming that her employer sent her a case of White Claw.

In a video seen more than 167,000 times, TikTok user Mickey tells her followers that the gift is one of numerous “perks of corporate America.”

Mickey says she was first gifted a lunch box from the company, which she has declined to name, for simply completing an Excel sheet. Mickey says she responded excitedly by referring to the item as a “White Claw holder,” much to the humor of her boss.

“My boss was laughing because I was like, ‘Oh my gosh I’m so excited I got a White Claw holder,'” she recalled. “And they were like, ‘No you idiot that’s a lunch bin.’ And I was like, ‘No it’s the perfect size for a case of White Claws.”

Some time after, Mickey says she heard a knock on her door. Much to her surprise, Mickey says her boss from New York had used a delivery service to send a case of White Claw to her home.

“Can you believe it?” she says.

The Daily Dot reached out to Mickey to inquire about her viral video but did not receive a reply by press time.

Mickey’s video was met with an assortment of reactions from users, both supportive and critical.

Many congratulated the TikToker for clearly landing an ideal job.

“You’re on a good team,” one user responded. “Those are hard to find—enjoy it.”

Others related with the term personality hire as well, which is used to describe people who believe they were hired more so for being likable than anything else.

“100% a personality hire,” one user wrote. “Me at every job I’ve ever had never know what im doing but im talkative and bubbly most days.”

Countless others demanded to know where they could find a similar employer.

“Love this! Where do you work?” another user asked. “I’m desperate to find a new corporate gig. My employer isn’t a good fit and sounds like yours is great!!”

But not everyone agreed with Mickey’s description of corporate America.

“We must be working in a different Corporate America…” one TikToker said.

One user even argued that Mickey’s treatment was likely based on her looks.

“Oh to be a decent-looking, young, Caucasian woman,” they wrote. “Live it up, not even mad.”

Either way, the video continues to rack up views and spark debate on modern work culture.