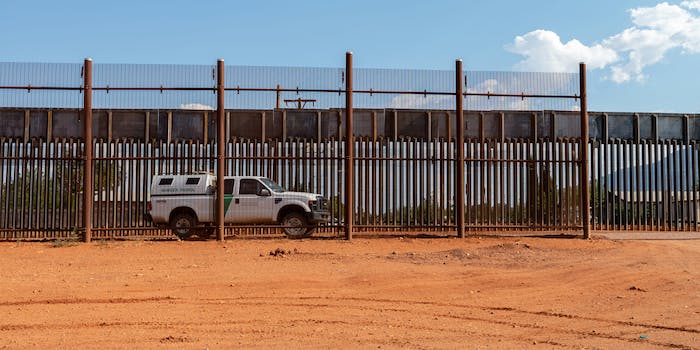 Meet the people actually donating to the border wall GoFundMe

Since President Donald Trump’s plan to build a wall continues to stall in Congress—although funding passed in the House last night—a Trump fan has attempted to take matters into his own hands.

Veteran Brian Kolfage started the “We The People Will Fund The Wall” GoFundMe page on December 16 and has raised over $9 million within three days.

“I have grandparents who immigrated to America legally, they did it the correct way and it’s time we uphold our laws, and get this wall BUILT!” Kolfage wrote on the page description. “It’s up to Americans to help out and pitch in to get this project rolling.”

Though details aren’t solidified, Kolfage’s crowdfunding has the goal of transfering funds to the Trump administration.

It’s unclear how exactly that money would contribute to building a wall since the U.S. Treasury can only accept gifts if they reduce national debt (a new bill is trying to change that, but Congress has enough issues to take up that that one is unlikely to pass.)

It’s also worth noting that this isn’t the only cause Kolfage is leading. According to NBC News, the veteran failed to mention his right-wing Facebook page that was shut down by the platform.

Kolfage’s goal for now is to raise $1 billion of the $5 billion the wall would reportedly cost. He wants to raise more, but GoFundMe has a cap of $1 billion. His rationale is that if every person who voted for Trump in the 2016 election pledges $80, the wall would be covered.

Kale Goodman, a co-founder of an accounting service who lives in St. George Utah, donated $100 to the GoFundMe page.

She’s one of more than 117,000 people around the world who have contributed so far.

“I know that the wall will not stop things 100 percent and there will need to be more security along the wall, but I do think it will help dramatically slow down those kinds of activities,” Goodman said, referencing sex and drug trafficking.

As many noted the xenophobic intentions of the GoFundMe, a competing GoFundMe project took off. On December 19, Charlotte Clymer, also a veteran who works on the Human Rights Campaign’s communications team, started a “Ladders to Get Over Trump’s Wall” GoFundMe page—but it’s not what you think.

According to the GoFundMe page, the money this page raises will be donated to the Refugee and Immigrant Center for Education and Legal Services (RAICES), a nonprofit based out of Texas.

“We wanna make sure ladders are ready to send over to our undocumented friends and help them,” Clymer wrote. “If this seems ludicrous, we welcome you to the coalition of reasonable adults.”

“I’ve really been happy with how this has generated conversation on just the absurdity of the wall in general,” Clymer told Business Insider. “Undocumented folks are not bringing crime or drug smuggling or any of this job-stealing nonsense to our country.”

“The U.S. is a sovereign nation and our government has the obligation to protect its citizens. I also believe employers and other ‘enablers,’ such as sanctuary cities and organizations who promote breaking our laws and those who benefit from cheap labor of illegal immigrants should be punished,” the manufacturer’s representative from southern Louisiana said.

He donated $100 to fund the wall. “I also hope that our immigration system is overhauled and streamlined to allow people who are worthy and willing to come here through the proper channels.”

But responses were also steeped in misinformation pushed out by the Trump information, discussing children used as drug mules and being exploited by sex traffickers. They hoped that a wall would somehow rectify the problems south of the border, too.

The Daily Dot reached out to 60 donors for both the wall and the ladders. As of publication time, only wall supporters responded.

Both crowdfunding campaigns have received plenty of attention on social media, with #gofundthewall trending on Twitter over the week and celebrity voices chiming in.

As for Trump’s long-standing promise that Mexico would pay for the wall, which he walks back more and more each day, Trump supporters seemed unfazed. It’s a hallmark of the president’s fans, who tend not to care whether he’s being honest or truthful when he speaks.

“Screw the Democrats!  This is my country!” Kimberly Wehr-Licht, a toll collector from Albrightsville, Pennsylvania, who donated $10 said. “If Mexico won’t pay for it we will! It means being American to me!”

If Kolfage’s goal of $1 billion isn’t met, he promises to refund all donations, meaning all the contributions are as worthwhile as Trump’s promises that Mexico would pay for the wall.