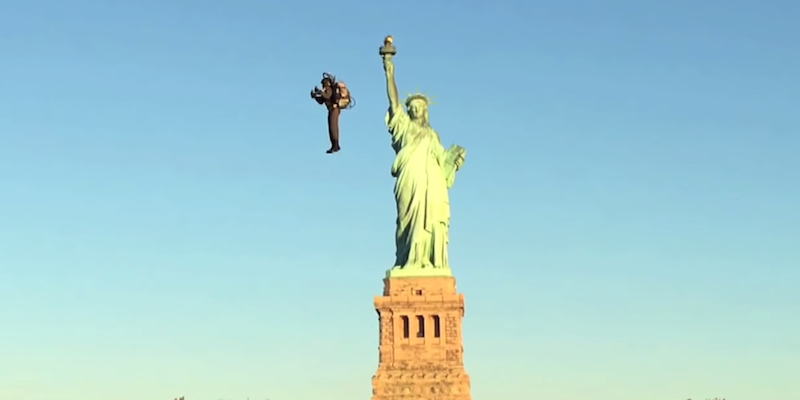 The competition is set for Autumn 2019.

Flying cars, self-driving vehicles, and hyperloops are right around the corner, but what about everyone’s favorite sci-fi gadget: jetpacks?

Don’t worry, Boeing’s got you covered. The company announced today that it will sponsor an epic jetpack “fly-off” competition sometime in Autumn 2019 with a winning prize of $2 million.

The GoFly Prize, a two-year global competition, was established to encourage the creation of a “personal flight device” that can carry a passenger 20 miles without running low on fuel or battery. The rules ask that the device is “safe, useful, and thrilling.”

“Thanks to recent advances in materials, propulsion, and autonomy, we believe the world is ready to make the next leap in flight innovation,” Greg Hyslop, Boeing’s chief technology officer, said in a video statement. “Will it be a jetpack, a personal drone, even a motorcycle in the sky?”

Any form of transportation is eligible as long as it meets safety requirements. According to its official registration page, GoFly is looking for, “an ‘everyone’ personal flying device, capable of being flown by ANYONE, ANYWHERE. It should be a device for ALL: young and old, city-dweller and country-dweller, expert and novice.”

Boeing will hand out $2 million over three phases. The first is a written report, with up to 10 winners awarded $20,000 each. Up to four teams will be awarded $50,000 in phase two for “demonstrated performance of progress to date.” The remaining $1.6 million will go to the winners of the final competition, with $1 million awarded to the best overall score, $250,000 for the quietest entry, another $250,000 for the smallest entry, and $100,000 for “disruptive advances of the state of the art.”

GoFly says all teams will retain their intellectual property rights and will only need to divulge information to judges and members of GoFly. The organization will even provide teams with mentors and masters who will check in every month to help with design, engineering, finance, and law.

Jetpacks have been around for a while, but no one has come up with a practical design that can be commercialized. In fact, in 2014, Google abandoned its jetpack project, claiming it would be too “power inefficient.” GoFly hopes its upcoming competition will spur the development of personal flight machines, much like Musk’s hyperloop competitions have led college students to create their own high-speed transit systems.

Registration for the GoFly Prize competition opened today and will close on April 18, 2018.