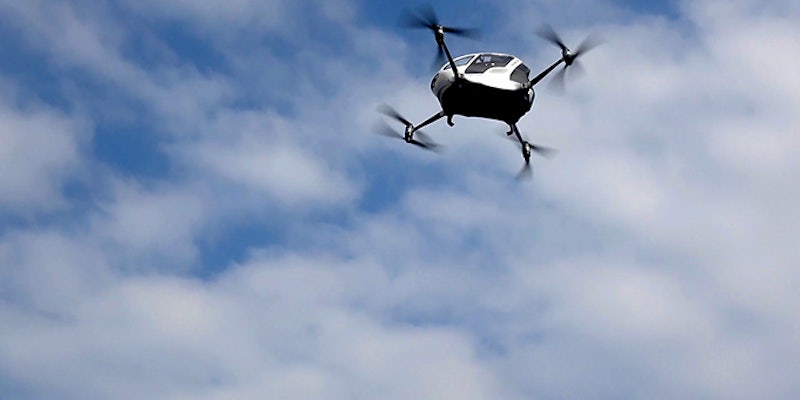 Dubai plans to use autonomous taxi drones by the summer

Dubai could be the first city in the world to get autonomous drone transport, as soon as this summer. At the World Government Summit this week, Dubai’s Roads & Transportation Agency Chief Mattar al-Tayer announced that the city would begin using the Ehang 184 autonomous aerial vehicle  for transport beginning this July.

The eight-propeller, four-legged aircraft has already been tested in the city, flying over Dubai’s iconic Burj al-Arab skyscraper hotel. It can carry one person who weighs 220 pounds or less, along with one small suitcase. It can fly up to 31 miles on one charge, which lasts about half an hour.

To use the drone, a passenger would strap into its lone seat, and then select a destination from a touchscreen. The vehicle would fly autonomously to that destination while being monitored by control room personnel on the ground (over a 4G data connection). The drone itself can reach speeds up to 100 mph, but will typically operate around 62 mph.

While the U.S. is dabbling in autonomous vehicles and new modes of transport (like Elon Musk‘s proposed Hyperloop), Dubai’s leader, Sheikh Mohammed bin Rashid Al Maktoum, is making it a priority. Besides introducing drone transport this summer, the United Arab Emirates is also interested in potentially building its own Hyperloop between Dubai and Abu Dhabi. And by 2030, Dubai wants at least 25 percent of passenger trips into the city to be done in autonomous vehicles.

Dubai has been considered one of the worst cities in the world for drivers, so taking the “driver” out of the equation should help ease congestion in the city, while putting it on the forefront of emerging technology adoption.