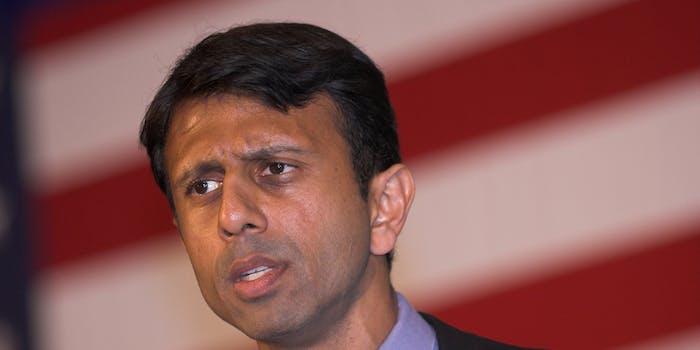 Bobby Jindal drops out of the 2016 presidential race

Lousiana Gov. Bobby Jindal has suspended his campaign for president.

“This is not my time. I’ve come to the realization that this is not my time. So I came here to announce that I’m suspending my campaign for president of the United States,” Jindal said on Fox News’s Special Report with Bret Baier.

Jindal recently signed an executive order “instructing state agencies to take all available steps to stop the relocation of Syrian refugees to [Louisiana].”

Jindal also had the most cringe-worthy campaign slogan of the year: “Tanned. Rested. Ready. Jindal 2016.”

Jindal frequently touted the support of Duck Dynasty star Willie Robertson. Now that Jindal is out, who will the politically savvy Robertson endorse? Probably Donald Trump, as Robertson couldn’t help himself from gushing over Trump while Jindal was still in the race.

“I realize that our country is off on the wrong track right now. Everyone knows that, but don’t forget, this is still the greatest country in the history of the world—and every single one of us should start every day by thanking God that we are fortunate enough to be U.S. citizens,” Jindal said.

Jindal kicked off his 2016 campaign by releasing a hidden camera video where he surprised his children with the announcement that he’s running for president. Much like the majority of Americans, they didn’t really care. Jindal will drop out of the 2016 race in the same way he entered: quietly.