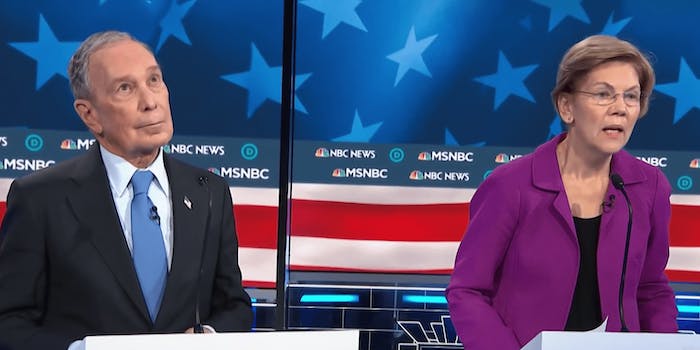 She's continuing to put him on the spot.

Sen. Elizabeth Warren (D-Mass.) released a contract she drafted for former NYC Mayor Michael Bloomberg to allow him to unbind his employees from nondisclosure agreements (NDAs) they signed.

Warren reverted to her years of studying law by showing off the contract at her CNN town hall on Thursday.

Bloomberg has admitted to legally prohibiting an unreleased amount of employees from discussing allegations of sexual harassment at his company, Bloomberg L.P.

The topic flared up at Wednesday night’s debate.

“This is an election for president of the United States, so transparency here is important,” Warren said at the town hall.

Warren tweeted the top half of the contract she wrote up, too. It basically releases any Bloomberg employee from the agreement that legally binds them from disclosing any harmful information against Bloomberg.

At the most recent Democratic debate on Wednesday, Bloomberg came under fire from Warren for not allowing his employees to speak out about the allegations.

“We have very few nondisclosure agreements… none of them accused me of doing anything other than maybe they didn’t like the joke I told,” Bloomberg said in response to Warren at the debate on Wednesday.

The Bloomberg campaign did not respond to a request for comment by the Daily Dot.

But the Warren campaign awaits a response.

“All Mayor Bloomberg has to do is download it … sign it, and then the women, or men, will be free to speak and tell their own stories,” Warren said at the town hall.

Update 3:35pm CT, Feb. 21: In the wake of news stories about their exchange, the Bloomberg campaign has relented a tad.

In a tweet, Bloomberg said they’d identified three women who had complained about his comments, and that if they wished to be released from their NDAs, they could be.