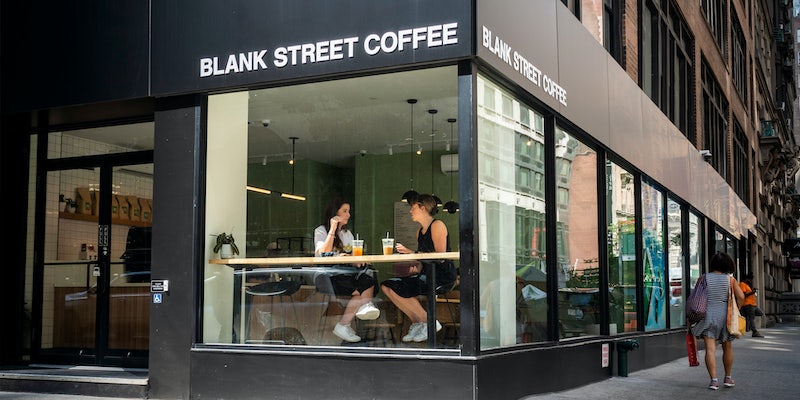 The omnipresent coffee chain might have its first unionized location.

Blank Street Coffee, a venture capital-backed coffee chain that has become increasingly popular in recent months, is getting hit with a union push.

According to documents published by the National Labor Relations Board (NLRB), a Blank Street in Brooklyn has voted to unionize, and the NLRB sent “Initial Letters” to the employees and the owners of Blank Street Coffee.

Blank Street did not respond to a request for comment.

It’s the latest in what has been a rough summer for the upstart coffee chain. They’ve become somewhat of a meme on social media, and New Yorkers went from curious to annoyed by their omnipresence in the city. According to their app, there are 45 locations in New York and the brand has opened two in Boston and Washington, D.C., with more on the way.

The teal-colored, millennial-focused stores are built off a fairly simple concept that has worked in coffee before: automation.

Blank Street is a venture-capital-funded chain that uses fully automatic espresso and drip machines, meaning baristas can make drinks at the press of a button. Blank Street’s pitch was to “allow baristas to focus more on customer service than on coffee,” but critics have said the automation allows managers to give baristas more work to do.

If this sounds familiar, it is. This is the exact same business model that made Starbucks a coffee giant in the 2000s and 2010s, the ability to provide a consistent, repeatable product regardless of who was working behind the coffee bar or which location it was. Blank Street has even started to draw comparisons to the coffee behemoth.

Initially, according to an interview with Airmail, the founders wanted to “open in neighborhoods that had not as many other options,” yet they opened their first shop in Williamsburg, home of New York coffee icons like Devocion and Sey Coffee. Now, they’re opening up locations within spitting distance of locally owned and operated coffee shops—attempting to push them out, as the company is backed by massive venture capital cash. According to the New York Times, the company raised $67 million in its effort to make coffee from Silicon Valley VCs.

The union push in the past year has been led particularly by disgruntled millennials and Gen-Z service workers, so it’s no wonder it finally came to Blank Street. On TikTok, Twitter, and Instagram, young people are ranting about Blank Street and decrying its venture capital-backed blandness. It appears the online push that gave Starbucks 250 unionized locations has come for the tech bros.