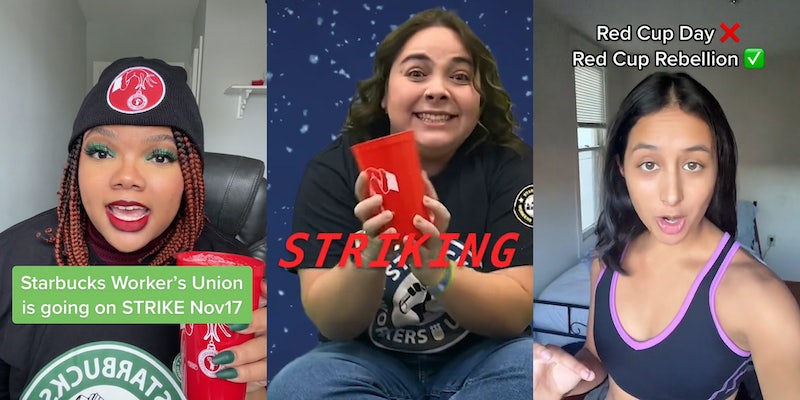 The union worked with youth-led activist group Gen-Z for Change to coordinate messaging.

The Starbucks Workers United union is using TikTok creators to promote their #RedCupRebellion strike, with more than 100 stores nationwide picketing on Thursday.

The strike coincides with the company’s “Red Cup Day,” where Starbucks locations are giving away free reusable red cups with select coffees to coincide with the holiday drinks rollout. The union has used social media heavily to promote its campaigns and strikes before, but Thursday is the first time the union has tapped into the creator space to market the strikes.

According to Myca Hinton, a content creator for Gen-Z for Change, a youth-led social media-centric activist group, the union worked with the activists to create TikTok content.

“Our team reached out to me to ask if I’d like to be apart of the #RedCupRebellion campaign to spread the news of the strike,” she said in a statement to the Daily Dot. “I wasn’t paid to make my video and GenZ for Change worked with SBWU about a week in advance to send out their packages. There was no contract involved but SBWU and GenZ for Change did work together to have cohesive messaging on both pages.”

Elise Joshi, the acting director of Gen-Z for Change, also made videos talking about the strike.

The package sent to creators included a custom holiday-themed red cup, similar to the Starbucks cup but with union branding. It also includes a beanie, T-shirt, and pins, all of which Joshi said she would wear a lot.

Another Gen-Z for Change creator, Victoria Hammet, also made a video calling out Starbucks’ union-busting tactics.

“There are 250 Starbucks locations that have unionized and still do not have a contract yet,” she said. “The union is fighting for things like adequate staffing, overall making a better experience for workers and customers, which is something that Starbucks can very realistically accomplish. But instead of working with the unions, Starbucks has used a bunch of union-busting tactics. So tomorrow Starbucks employees at different unionized locations will be striking.”

Between Myca, Elise, and Victoria’s videos, they’ve amassed over 150,000 views on TikTok.

Elise and the union did not reply to a request for comment.

Starbucks has seen a massive union drive over the past year, with over 250 Starbucks locations voting to unionize. They’ve received pushback from Starbucks, who have fired union organizers and closed unionized stores, and the company has had hundreds of complaints filed against them by the National Labor Review Board this past year. Starbucks is just one of several companies facing pushes to unionize. Trader Joe’s and Apple have both seen union votes at their stores in the past couple of months and have shown a reluctance to negotiate.