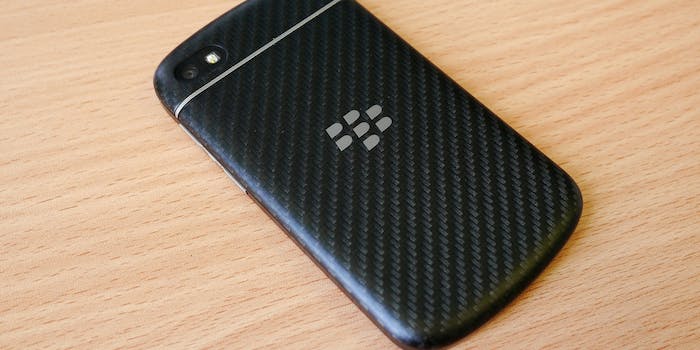 Perhaps he should have consulted some experts first.

BlackBerry CEO John Chen has been doing everything he can to try to bring the Canadian phone maker back from the brink. His latest gambit to claw back to parity with the companies that have long since taken over BlackBerry’s market share is a creative one, given that it rests on a deliberate misunderstanding of net neutrality.

In a letter to members of the U.S. House and Senate that he later published as a blog post, Chen argued that net neutrality needed to extend to content and application neutrality as well. “Neutrality,” he declared, “must be mandated at the application and content layer if we truly want a free, open and non-discriminatory internet.”

Chen went on to decry Apple‘s iOS platform and the closed App Store ecosystem that supports it.

“Apple does not allow BlackBerry or Android users to download Apple’s iMessage messaging service,” he wrote. “Netflix, which has forcefully advocated for carrier neutrality, has discriminated against BlackBerry customers by refusing to make its streaming movie service available to them.”

The Blackberry chief executive believes that his company is already embracing what he called “openness and neutrality” by offering BBM to iOS and Android users, and he thinks it’s time for other developers to do the same.

Ignoring BlackBerry, Chen argued, has led to “a two-tiered wireless broadband ecosystem, in which iPhone and Android users are able to access far more content and applications than customers using devices running other operating systems.”

Chen’s argument is the equivalent of demanding movie releases on VHS or album releases on 8-track tapes. After all, people still own those devices, and following Chen’s argument would dictate that those device owners deserve new content, too. Never mind the fact that, as with Blackberry app development, it would severely strain a business’ time and money to continue serving platforms that the technology world deems outmoded.

Net neutrality, the principle of ensuring a fast and reliable Internet by treating all data traveling through it as equal, is a very important goal. Forcing Netflix to placate a dwindling community of BlackBerry users so they can stream House of Cards again is not quite as laudable.