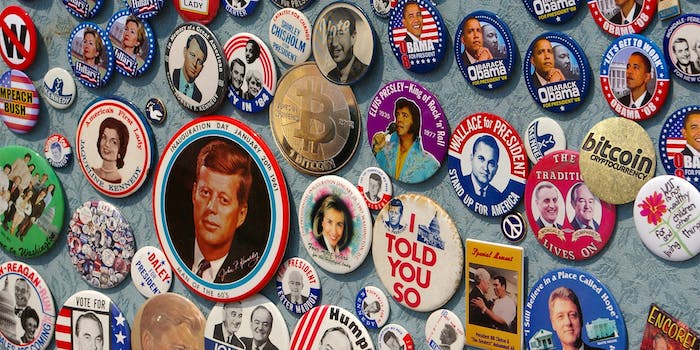 Could Bitcoin affect the 2014 midterm elections?

The emergence of Bitcoin on the political scene creates a number of wrinkles in the already complex world of campaign finance laws.

The next big thing in campaign fundraising is being pioneered by a politician you’ve never heard of.

“I run in a lot of libertarian circles, so I’d already heard of Bitcoin,” said Warden, now in his second term, reflecting on his 2012 campaign. “But then one of my staffers, who set up my website, he asked to be paid in Bitcoin. So I said sure. Then he recommended setting up a wallet and accepting campaign donations that way.”

What happened next came as a shock to both Warden and his staffers. In his 2012 election campaign, Bitcoin donations came pouring in at an astonishing rate—and from surprising locations. Chatter on message boards devoted to the open-source currency led to a spike in donations from around the world, so much so that the novelty of the idea turned into a temporary panic, prompting serious accounting concerns.

Warden raised $1,600 in Bitcoin, and with it, a slew of difficult-to-answer questions about the future of the currency and its role in politics. Today, those campaign contributions would be worth an estimated $120,000.

Created in 2008, Bitcoin is an electronic currency that exists outside of any governmental body. It’s created, or “mined,” by users whose computers solve complex math problems in exchange for newly minted coins. Due to its anonymous nature, Bitcoin first became popular on the Deep Web—the sites hidden on the Tor browser—but it’s gained major momentum around the world recently.

In the last few months, Bitcoin has found favor around the world, from Germany, where it’s considered a legal currency, to the island of Cyprus, where a local university allows students to major in the subject. In Canada, the world’s first Bitcoin ATM recently opened for business.

Closer to home, the unprecedented surge in Bitcoin’s value—it’s currently trading at a record-high $812—has forced politicians to take note, especially considering some have speculated that it could become the “weapon of choice for tax evaders,” due to its anonymous nature and the ease with which it’s transferred.

Warden was way ahead of the Bitcoin curve when he started accepting donations in 2012. For many, it was a symbolic move.

“I know [the campaign contributors] were supporting Bitcoin more than me personally as a candidate,” Warden told the Dot.

But as Warden quickly learned, accepting bitcoins in the form of a digital wallet is the easy part. Figuring how to do so without running afoul of U.S. election laws, however, proved challenging.

The campaign had to shut down its donation pipeline to confer with the state’s top election official, the secretary of state, which set up reporting guidelines to make sure the Bitcoin values and the identity of donors were reported consistently. It was decided that all Bitcoin donations would be converted into cash within 24 hours to keep their values from fluctuating too much, and Warden was forced to return all the overseas donations to keep from running afoul of U.S. election laws.

The issues Warden (and Vermont State Senate candidate Jeremy Hansen) faced in local 2012 elections are now being played out on a national level ahead of next year’s midterms, potentially opening up political donations to a whole new sector of the voting public.

That’s thanks in part to the work of Dan Backer, an attorney with the Conservative Action Fund, a political action committee that’s asked the Federal Elections Commission (FEC) to lay down some ground rules for Bitcoin donations ahead of next year’s campaigns.

“It’s important to get all the guidelines set before next year,” Backer said. “There is a lot of interest from candidates out there, but there’s also been a lot of questions.”

Indeed, the emergence of Bitcoin on the political scene creates a number of wrinkles in the already complex world of campaign finance laws. It’s unclear how the value of the rapidly fluctuating currency should be calculated or how to properly record donor contributions.

The FEC deadlocked last week on Backer’s request, saying more time would be needed to study the issues associated with Bitcoin donations. The decision was split 3-3 along party lines, with Democratic members of the commission opting not to let Bitcoin be used in campaign donations.

It was an abrupt turn around for those watching the issue unfold. Draft opinions from the FEC issued earlier this month indicated that commissioners were ready to allow Bitcoin donations, as long as they were treated as “in-kind contributions.” Essentially, bitcoins would have be treated the same way as donations of stocks and bonds, meaning campaigns have to convert them into dollars before spending it or depositing it into campaign coffers.

The commission was split on a number of questions, the biggest being how should Bitcoin be counted. While just last week, the Department of Justice and Securities and Exchange Commission declared that bitcoins are “legitimate financial instruments,” the FEC disagreed.

“Because Bitcoins are neither the currency of any country nor negotiable instruments, Bitcoins are not ‘money’ under commission regulations,” the FEC wrote in its initial draft. “Therefore, a political committee that receives Bitcoin contributions may not treat them as monetary contributions.”

Though treating Bitcoin as a non-monetary, in-kind contribution would seemingly resolve that issue, the currency’s floating value would still complicate established contribution limits. Federal law limits individual contributions to $2,600 per election per candidate and to $32,400 to political parties. PACs are allowed to donate up to $5,000 per candidate. If the FEC were to treat Bitcoin as an in-kind contribution, it would count toward these totals just the same. But given how sharply the Bitcoin market can rise or fall, campaigns would need to actively monitor the currency’s value to ensure that it adheres to those limits.

That still leaves the issue of accountability. The FEC commissioners’ chief concerns have revolved around making sure Bitcoin isn’t used to mask the identity of donors and circumvent contribution limits. Given its anonymous nature, putting a name and address to each Bitcoin donation poises a considerable challenge, and presently, anyone who contributes over $25 (Bitcoin or otherwise) must be recorded.

“There’s a balancing act here. There’s this new technology that no one wants to strangle in its infancy,” said Commissioner Matthew Petersen, adding that the panel also is “trying to make sure that there are adequate protections so that it couldn’t serve as a vehicle for illegal or prohibited contributions to flood into the system.”

While Bitcoin has been most readily embraced by libertarian candidates as an alternative to the Federal Reserve’s “monopoly” on currency—the Libertarian National Party itself accepts them—Warden and other enthusiasts insist it’s poised to spread across the aisle.

“It exemplifies the values of the free market,” Warden said, “and there’s no reason why it shouldn’t be allowed in campaigns just like any other type of money.”

“Bitcoin appeals to many different groups for different reasons,” echoed Stephen Pair, CEO of BitPay. “Bitcoin is simply better software and as such doesn’t really have any political bias.”

Roger Ver, an investor in several Bitcoin ventures, offered a more cynical take why there might be a rise in Bitcoin donations in 2014.

“Candidates love any way they can get money,” he said.