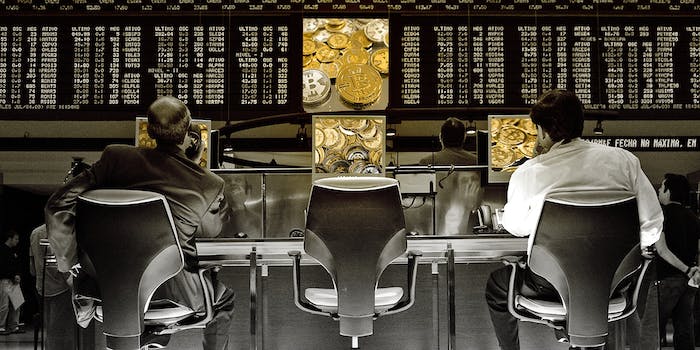 Bitcoin booms for businesses that take the leap

Bitcoin is proving to be a lucrative experiment for businesses both big and small.

In Dec. 2013, Overstock.com announced it would begin accepting the digital cryptocurrency Bitcoin. The online retailer planned to make the switch in the second half of 2014. But it was so easy to implement that it launched the program months early—on Jan. 9, just one week after the development team had gone to work.

That day, Bitcoin would comprise 2.5 percent, or over $125,000, of the company’s revenue, according to chairman of the board Jonathan Johnson, based on the price of Bitcoin at the time of the report.

Five months later, that number had increased by a factor of 10, hitting $1.6 million on May 27. Bitcoin sales now count for up to 1 percent of daily sales on Overstock. It may not seem like much, but in a multi-billion dollar company, the numbers add up quickly. And Johnson predicts that number will leap to between $10 and $15 million by the end of 2014.

Overstock is one testament to the increasing success of Bitcoin’s adoption into companies, from gun stores to Las Vegas casinos. While the cryptocurrency hasn’t seeped into the daily lives of the mainstream, its dedicated users have allowed for companies to see success in the seamless transaction process and the benefits Bitcoin could bring them as it increases in popularity.

At Central Texas Gun Works, in Austin, Texas, owner Michael Cargill began accepting Bitcoin payments in January 2014. As “America’s first Bitcoin gun store,” a term Cargill coined, his store is one in a growing number of small and large businesses accepting Bitcoin, or other virtual currencies, as a form of payment.

For Cargill, who operates under a plethora of federal and state laws, accepting Bitcoin is a matter of convenience, though word of mouth and social media advertising has allowed him to enjoy a 50 percent rise in sales. The majority still do not come from Bitcoin, he says, as the percentage of sales, in-store and online, from Bitcoin mimics that of Overstock’s.

In Las Vegas, Nev., however, hotel owner Derek Stevens’s decision to accept Bitcoin has brought in a new market of customers who have actively sought his businesses so they can use Bitcoin. As the CEO of The D Hotel and Casino and The Golden Gate Hotel and Casino, Stevens said he anticipated younger, tech-savvy people might visit his hotels after the decision. But he’d never considered how convenient it would be for international travelers to pay using cryptocurrencies and without having to worry about currency exchange rates.

“You can’t use Bitcoin to gamble at his hotel,” Stevens told the Daily Dot. “But you can use it for rooms, drinks at the bar, or souvenirs from gift shops. His two hotels are the only Las Vegas locations to offer that option, and he’s reaping the benefits.”

“The people who are using Bitcoin wouldn’t have shown up if we weren’t accepting Bitcoin,” he said.

How many businesses use Bitcoin in total? There’s no central index. But it’s at least 30,000, which is the number of businesses that work with Bitcoin processing company BitpPay, according to the company’s vice president of marketing, Stephanie Wargo. Bitpay processes Bitcoin payments and converts it to cash for its clients, allowing companies to sidestep the sometimes volatile fluctuating exchange rates. Since BitPay’s conception in 2011, it’s seen exponential growth. In September 2012, it served 1,000 businesses. The next year, 10,000. This year, Wargo said their goal is to hit 100,000 businesses.

For the businesses who have accepted Bitcoin, making payments is convenient. It’s also significantly safer than credit or debit card transactions.

“If you pay [online] with a [credit card], you’ll have to put in your billing address, your shipping address, and your credit card information, and you’ve given up a lot of personal information” Johnson explains. By paying with Bitcoin, the customer only provides his or her shipping information and the Bitcoin transaction number.

“In effect, it’s like a cash transaction done digitally,” he adds.

It’s also cheaper for a company to process a Bitcoin payment than one via a credit card. Once the payment is processed, most Bitcoin merchants convert the virtual currency back to cash, using gateway services such as BitPay, Coinvoice, and Coinbase, which allows for more financial protection.

Since the Bitcoin-to-dollar amount is volatile and can fluctuate dramatically on any given day, the quick conversion ensures companies receive the actual dollar amount for their products. Earnings reported by companies, such as Overstock, are based on the conversion rates at the time of those reports.

The increasing integration of Bitcoin into everyday life could catapult the currency past the stages of early adoption and gain an increasing mainstream audience, even for businesses who do not accept it.

For instance, Gyft, an online and mobile app allowing its users to manage their gift cards in one space, allows people to purchase gift cards using Bitcoins for large companies such as Target, Amazon, Whole Foods Market, and Sears. The payment integration indirectly increases the amount of businesses where Bitcoin users may spend their money.

Like the Stevens’s business, other Bitcoin business owners are quick to point out that it will take a lot of work on the government’s end to regulate and stabilize the currency before gaining widespread usage. It’s a future that nobody is certain about.

“It would be trying to predict what the Internet was going to look like in 2000 in 1990,” Johnson says. “Nobody really knows.”

For now, it’s a low-risk move for businesses, and they’ve been able to reap the benefits.