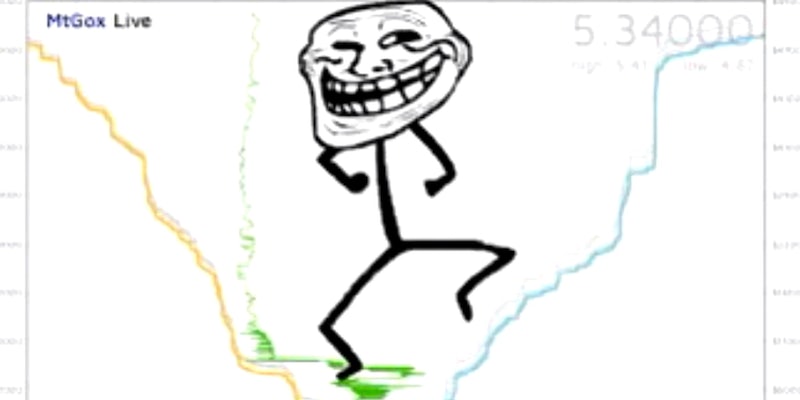 Participants at this weekend’s Bitcoin 2013: The Future of Payments conference, a three-day San Jose, Calif., summit that featured a whole slew of thought leaders in the Bitcoin revolution (brothers Cameron and Tyler Winklevoss, Coinbase CEO Brian Armstrong) learned, or laid witness to the fact, that two people exist in this world who consider it a hobby to remix the lyrics of well-known pop songs into tracks about bitcoins.

The duo, which goes by ZhouTonged on both YouTube and Reddit, has racked up more than 56,000 YouTube views through eight remakes of American classics, like Lauryn Hill’s “Lost Ones” (which he remade into “Lost Fundz”), Billy Joel’s “The Longest Time” (“Holding”), and Drake’s “Started From the Bottom” (“Bitcoin’s Here”).

In some cases, they rap. In others, they sing. In the case of “Mr. Bitcoin,” a remake of the Chordette’s classic “Mr. Sandman,” they impersonate a barbershop quartet and set that music to an image of a troll face dancing on a line graph.

It’s absolutely bonkers. Not surprisingly, the two were a hot ticket this weekend at Bitcoin 2013.

Redditor SeansOutpost took to subreddit r/Bitcoin Saturday afternoon to let ZhouTonged know that he’d been given “the official go ahead from the foundation” to open up a performance slot for him. All ZhouTonged needed was an input jack, microphone, and one bottle of Jameson.

SeansOutpost reported back to Reddit after the performance. “If you missed this show, you missed … history,” he wrote. “ZhouTonged got the whole conference bumping and Charlie [Shrem, CEO] from BitInstant jumping around dancing like a madman. It was insane.”

YouTuber Arjan Beumer posted footage from the performance on Sunday. It’s moderately interesting. Whether “the whole conference” was “bumping” or not really depends on how exactly you’d define the word “bumping.”