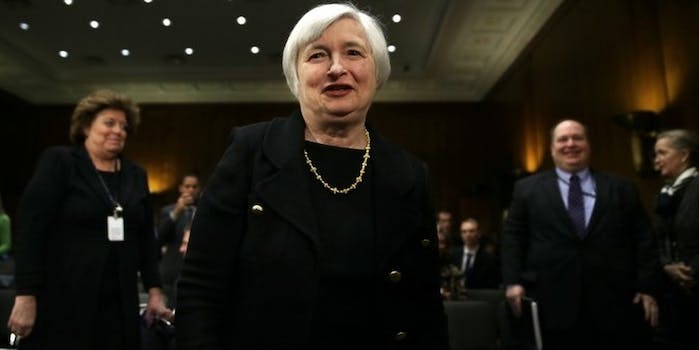 Despite significant turmoil in the Bitcoin markets this week, the recently sworn-in chair of the Federal Reserve, Janet Yellen, told Congress it was not the place of the U.S. central banking system to regulate the online cryptocurrency.

This comes following a turbulent week in which many U.S. politicians and prosecutors voiced an interest in bringing a regulatory hammer down on Bitcoin exchanges like Mt. Gox.

The Tokyo-based Mt. Gox, which used to be the world’s leading Bitcoin exchange, simply vanished earlier this week. For weeks prior, the exchange had halted all withdrawals for fear that hackers had breached their security measures to steal Bitcoin. The firm officially filed for bankruptcy in Japan on Friday, admitting that it had lost 750,000 of its investors bitcoins and 100,000 of its own. At current trading prices, that total amounts to roughly $480 million. That’s roughly 7 percent of the global Bitcoin economy.

This massive virtual banking breakdown has lead some U.S. politicians, like Sen. Joe Machin, D-W.Va., to call on the government to issue a total ban on Bitcoin and other digital currencies. Machin criticized Bitcoin as a “highly unstable and disruptive” economic force.

“I urge the regulators to work together, act quickly, and prohibit this dangerous currency from harming hard-working Americans,” Machin said in a written statement.

Meanwhile, a Manhattan District Attorney’s office has reportedly subpoenaed Mt. Gox and other Bitcoin businesses and exchanges. CNET said they are investigating the denial-of-service attacks that forced Mt. Gox to suspend withdrawals, precipitating the current crisis.

For those who’ve lost substantial amounts of money in the Mt. Gox bankruptcy, it may be frustrating to find no help from the government. After all, the government, through the Federal Deposit Insurance Corporation, has long been in the habit of insuring America’s private accounts to safeguard against just these types of banking calamities. But Bitcoin enthusiast have long trumpeted the virtue of a currency that is beyond the reach of government regulators.

It seems Yellen agrees, telling Senate Banking Committee that Bitcoin was simply outside the jurisdiction of the Federal Reserve.

“The Fed doesn’t have authority with respect to Bitcoin,” Yellen said. “But certainly it would be appropriate for Congress to ask questions about what the right legal structure would be for digital currencies.”

“It’s not so easy to regulate Bitcoin because there’s no central issuer or network operator,” she continued. “This is a decentralized global [entity] … we’re looking at this.”

In the past, the U.S. relationship with Bitcoin has been lukewarm but permissible. Though countries like Russia and Iceland have banned the currency from use, the U.S. has always allowed it. However, some users and entities have encountered trouble for running afoul of U.S. money laundering laws by mishandling the currency. That’s what happened last year when the Department of Homeland Security seized an American bank account belonging to Mt. Gox.