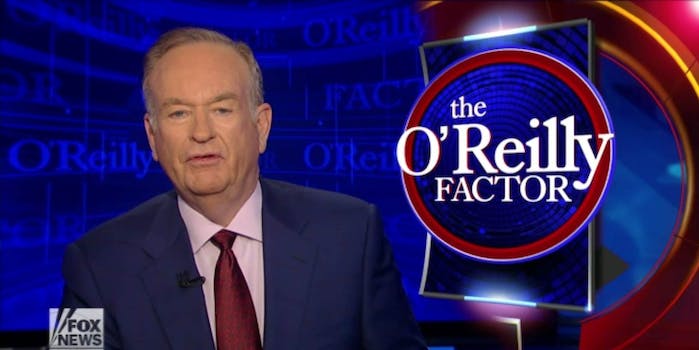 Fox News has repeatedly been both voted the most and least trusted news network on American television. It’s the highest rated and least informed.

Bill O’Reilly, who was recently at the center of a controversy about him stretching the truth on multiple occasions, thinks he knows why Fox gets so much hate: “The liberal media” and politicians are “desperate.”

“There is no question that powerful people in Washington are using websites to smear political opponents,” O’Reilly said.

“Hit pieces fly around in cyberspace and then find their way to mainstream media which gleefully promote their defamation for blatantly ideological reasons.”

He continued, adding that other conservatives like Peggy Noonan ought to “watch her back” after criticizing Hillary Clinton following her recent email scandal.

That’s because CNN and MSNBC are in dire economic straits, O’Reilly asserted.

“So hating Fox News about about competition, power, and money at the highest levels,” he argued. “If FNC did not exist, America would be a far different place and the far left ideology would have a far easier time. But we do exist and now dominate the primetime news cycle. Not good news for progressive politicians, the liberal media, and crazed zealots on both sides. Therefore, meetings are held, strategies devised, political assassins hired. Is there any doubt for whom they are gunning?”

O’Reilly boasted about the seresults in the latest Quinnipiac poll: 20 percent of U.S. voters say they trust journalism from Fox News “a great deal” and 35 percent say they trust it “somewhat.”

There are two ways to read that: First, Fox News has the most people who trust it “a great deal.” Local news comes in second place with 19 percent and CNN, in third, rates at only 18 percent.

However, Fox News finishes last among major TV news when “somewhat” comes into play, suggesting that viewers either trust Fox a lot or not at all.