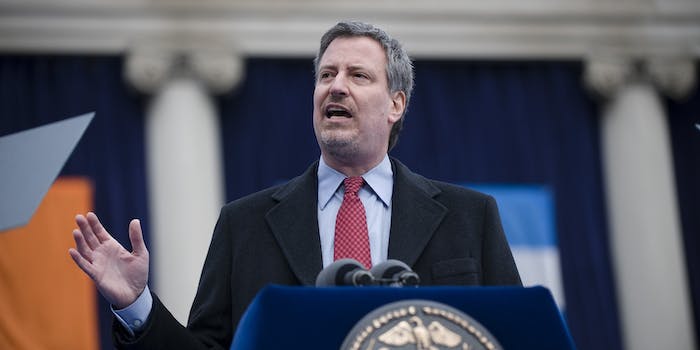 The Office of Public Advocate for the City of New York/Flickr (CC BY-SA 2.0)

He should quote the Onion version of himself more often.

de Blasio spent Tuesday defending himself after shutting down most of the city to prepare for Winter Storm Juno, which brought much less snowfall than meteorologists originally predicted. On Monday, however, as the city’s subway system fully shut down for the first time in its 110-year history, things seemed dire enough for The Onion to publish a doomsday-style article titled “NYC Mayor: ‘Reconcile Yourselves With Your God, For All Will Perish In The Tempest.”

It’s completely ridiculous in its language and tone, yet it echoed the widespread panic felt throughout the city prior to the storm. With the share count in the thousands, people seemed to love it.

Apparently, so did de Blasio.

“It’s so brilliant I had to do a reading of it,” the mayor told reporters on Tuesday.

de Blasio was talking to reporters at City Hall when he decided to give them a performance, which saw him uttering lines such as “all within the five boroughs will perish, cowering in their brittle dwellings.”

If only all press conferences were this entertaining.

Photo via The Office of Public Advocate for the City of New York/Flickr (CC BY-SA 2.0)