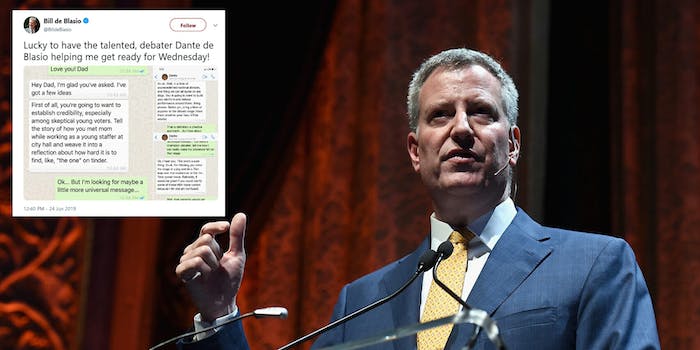 New York City Mayor and 2020 Democratic hopeful Bill de Blasio posted screenshots of text messages sent by his son about advice for the forthcoming Democratic primary debates on Monday and no one seems to buy it.

De Blasio, who is among a wide field of candidates who are trying to take on President Donald Trump in the 2020 election, posted three screenshots from a conversation with his son, Dante, about “what advice” he might have for him leading into the first Democratic primary debates.

“Lucky to have the talented, debater Dante de Blasio helping me get ready for Wednesday!” the New York City mayor wrote on Monday afternoon.

Lucky to have the talented, debater Dante de Blasio helping me get ready for Wednesday! pic.twitter.com/my51wahM6S

Within the texts, Dante makes what appears to be a joke about bringing dogs onto the debate stage. which admittedly would be unique. He also tells his dad to dunk on the stage and to crack a joke about Tinder.

Meanwhile, de Blasio talks about how he wants to “impress the American people by showing them I’m a can-do guy” and how he can “really make my presence felt on that stage.”

A campaign spokesperson insisted that the texts were authored by de Blasio’s son when contacted by Patch. However, the conversation had a lot of people cracking jokes on Twitter.

Texting in proper grammar should immediately be disqualifying. https://t.co/7GsPxEDlOK

He posted this purposely. Let that sink in. https://t.co/3YFM8trpk5

So much natural dialogue here. https://t.co/yXQBjRd4Ow

If Dante told you to fix the subway, would you do it? https://t.co/k6ty3mKBQY

De Blasio will try to try and make his “presence felt” during the first of two Democratic primary debates later this week.