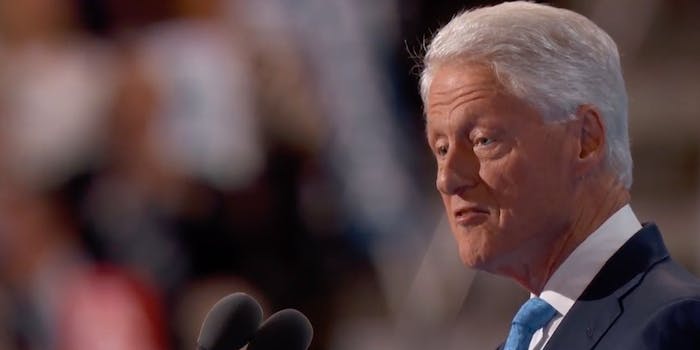 'She’s a change maker. That’s what she does.'

Hillary Clinton may be human after all.

In a folksy-but-stark rebuke to both Republicans and die-hard Bernie Sanders supporters, former President Bill Clinton on Tuesday night painted a picture of Secretary Clinton, the Democratic nominee, that is often shuffled to the bottom of a stack of caricatures.

“She’s insatiably curious, she’s a natural leader, she’s a good organizer, and she’s the best darn changemaker I’ve seen,” President Clinton said of his wife before a cheering crowd during his keynote speech before the Democratic National Convention in Philadelphia.

Secretary Clinton made history Tuesday as her party officially voted to make her the first female presidential nominee of a major American political party in U.S. history. The emotional roll-call vote hours earlier, which left some delegates wiping tears of joy while others left the floor in protest, colored President Clinton’s slow-burn speech that took us back to that fateful day in 1971 when he and Hillary Rodham first met.

Tears and hugs all around as @HillaryClinton wins Democratic presidential nomination #DemConventionhttps://t.co/ywXGXm3sMk

Watch as Bernie Sanders delegates storm out of the #DemConvention, and hear why from Indiana delegate Dianne Salazarhttps://t.co/gMR8EbOXct

“In the spring of 1971, I met a girl.” President Clinton said. Over the next hour, he took us through a detailed account of Secretary Clinton’s life—a life, he said, devoted to making the lives of American children and families better.

“She got so involved with children’s issues that she actually took an extra year in law school … working to determine what more could be done for children,” President Clinton said. “Hillary opened my eyes to a whole new world of public service by private citizens.”

After the Republicans, led by nominee Donald Trump, characterized Secretary Clinton as crooked, conniving, and a criminal during the Republican National Convention last week, President Clinton offered an alternative story—one filled with love for family, children, and working-class Americans; one of a genuine “changemaker” constantly on the move to make the world a little bit better.

From meeting her “crusty conservative” father and rambunctious brothers for the first time to watching her struggle with the decision to abandon her seat as a U.S. senator for New York to become President Barack Obama‘s secretary of state, President Clinton gave Americans a view of the “real” woman he married—the one whom so many voters and political pundits feel does not exist.

“How do you square the things I told you with the picture the Republicans painted of their opponent in Cleveland?” President Clinton said. “You can’t.”

“One is real. The other is made up. You just have to decide which is which, my fellow Americans.”