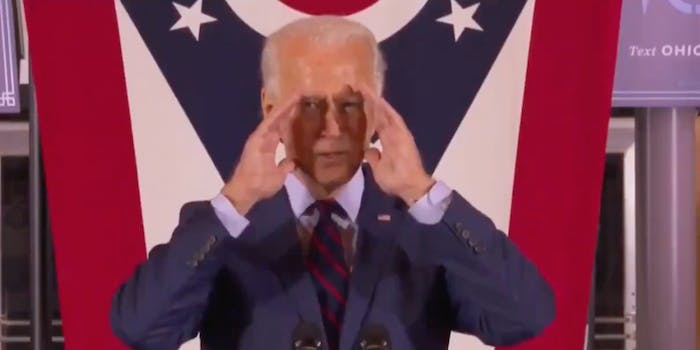 ‘What’s up with his hands?’ Biden makes weird hand movements and gaffe about Nazis in resurfaced video, perplexing the internet

A video of President Joe Biden has resurfaced, from back when he was still just a candidate, making an embarrassing gaffe during a voter mobilization speech. But it’s what he’s doing with his hands that’s got people on the internet talking.

The video comes from the MagaFarley Twitter account, which attempts to be providing political humor skewering public figures. (The account, in one tweet, tries to saddle Dr. Anthony Fauci with a “Dr. C-SPAN” tag.)

MagaFarley’s tweet shows a clip from an Ohio voter mobilization rally Biden did back in October.

The section of the speech covers Biden’s oft-cited motivation to seek the Democratic Presidential nomination in 2020: The Unite the Rally rally in August 2017 in Charlottesville, Virginia, which alarmed many Americans, an alarm compounded when then-President Donald Trump remarked that there were “very fine people on both sides” several days after the rally.

The snippet of the speech in the tweet pegs the rallygoers as “white supremacists, Nazi sympathizers carrying Nazi flags,” only it comes out as “Nazi f*gs” before Biden quickly catches himself, saying “flags” without missing a beat.

Also, in part due to how it’s edited, the next words, “using the exact same anti-Semitic jargon as was used in Germany in the 1930s,” comes out sounding like “Jewsin'” before abruptly cutting out.

The video clip shows Biden’s hands on his head, fingertips against his forehead, for the entirety of the eight-second clip.

But let’s go to the tape.

In the full video of the rally still housed on Facebook, at about the 20:18 mark, his hands go up to his head and remain there for about 15 seconds. As he first makes the gesture, he says, “Close your eyes; remember what you saw on television.” It’s conceivable that the initial hand gesture accompanies that statement… but then why do his hands stay there?

At the start of the video, he does mention having trouble seeing a dignitary that he’s looking to recognize “because of the light,” so was this just a matter of Biden trying to determine the identity of someone else in the crowd? Trying to make out something on the teleprompter? Was the light just too much?

Someone, responding to MagaFarley on Twitter, theorized he had a migraine coming on.

Another just went to a Ricky Bobby clip, in which the Will Ferrell character is saying, “I’m not sure what to do with my hands.”

Other Twitter users also shared the segment, getting much more online traction than MagaFarley.

One of the users later gave up, noting, “This is now muted … some of y’all saying some dumb shit.”

Which is, sometimes, a fair assessment of Twitter discourse.