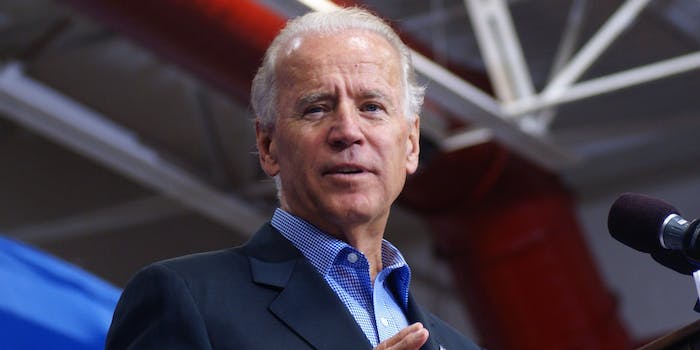 'This is our moonshot.'

“Vice President Biden said that with a new moonshot, America can cure cancer,” Obama said. “… Tonight, I’m announcing a new national effort to get it done. And because he’s gone to the mat for all of us, on so many issues over the past forty years, I’m putting Joe in charge of Mission Control. For the loved ones we’ve all lost, for the family we can still save, let’s make America the country that cures cancer once and for all.”

Biden’s son, Beau Biden, died of brain cancer in May of last year at the age of 46. In a post on Medium published during Obama’s speech, Biden mentioned that this effort is “personal” and asked Americans affected by the disease to share their story with him.

“From my own personal experience, I’ve learned that research and therapies are on the cusp of incredible breakthroughs,” Biden wrote. “Just in the past four years, we’ve seen amazing advancements. And this is an inflection point.”

Biden says “the science is ready,” but that the relevant “science, data, and research results are trapped in silos, preventing faster progress and greater reach to patients.” The Obama administration’s effort aims to help release the barriers between the status quo and a cure.

1.) Increase resources—both private and public—to fight cancer.
2.) Break down silos and bring all the cancer fighters together — to work together, share information, and end cancer as we know it.

While the details of the plan remain scant, Biden explains that the program will serve as a bridge between the relevant parties—“governments, private industry, researchers, physicians, patients, and philanthropies”—to facilitate greater and more expedient progress. The U.S. government, Biden writes, will also provide “funding, targeted incentives, and increased private-sector coordination” toward the program, though the details of that support remains unclear.

Late last week, Biden’s staff met with 15 cancer researchers and other members of the medical community to discuss possible areas of progress, USA Today reports. He has reportedly met with more than 200 people related to cancer research in recent months. The vice president is also credited with helping to successfully increase funding to the National Institutes of Health by $2 billion.

“This is our moonshot,” Biden wrote. “I know that we can help solidify a genuine global commitment to end cancer as we know it today—and inspire a new generation of scientists to pursue new discoveries and the bounds of human endeavor.”