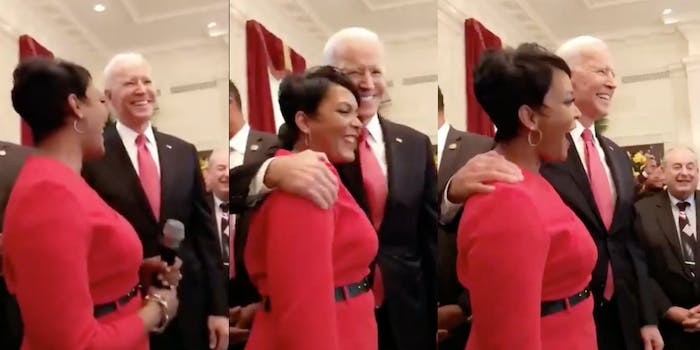 Conservatives think Biden had a maskless birthday party—he did not

One popular right-wing user even argued that the video showed a 'super-spreader event.'

Conservative Twitter users accused President-elect Joe Biden of having a maskless party on Friday to celebrate his 78th birthday. The only issue is that it never happened.

The false claim was spurred by a tweet from Atlanta Mayor Keisha Lance Bottoms, in which she wished Biden a happy birthday.

“Wishing out President-Elect @joebiden a VERY Happy Birthday from the great Blue state of Joe’gia!” she said.

The tweet included video of Bottoms singing “Happy Birthday To Ya” to Biden alongside a group of other people.

The video has since been viewed nearly 2 million times and has received well over 15,000 retweets.

Countless conservative users on Twitter cited the video as proof of hypocrisy from Biden, and other Democrats, given the ongoing coronavirus pandemic.

One popular right-wing user, Tony Shaffer, argued that the video showed a “super-spreader event” and demanded that CNN reporter Jim Acosta look into the matter.

“Are you going to investigate how many people @JoeBiden killed by encouraging this dangerous & reckless behavior?” Shaffer asked.

Had conservatives investigated the video themselves, however, they would have found that the footage was not taken on Biden’s 78th birthday.

As it turns out, as Bottoms later clarified, the video was filmed one year prior during Biden’s 77th birthday.

“Pre-Covid! This was in the @TPStudios White House following the @[email protected] debate on 11/20/19,” Bottoms tweeted.

Despite being thoroughly debunked, the video continues to be shared among conservative circles online.