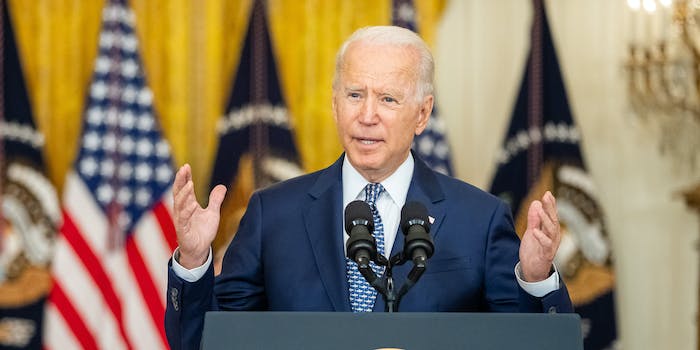 'It is critical for policymakers to understand how information policy can reduce data-driven discrimination and disparate treatment.'

President Joe Biden’s administration announced on Tuesday that it will hold a series of “listening sessions” to learn more about how data privacy impacts marginalized and disadvantaged communities.

The National Telecommunications and Information Administration (NTIA), an office that is part of the Commerce Department that advises the president, said in a public notice that it will hold the meetings on Dec. 14, Dec. 15, and Dec. 16. The notice was first reported by Axios.

In the notice, the NTIA mentioned how digital advertising has been shown to “reproduce historical patterns of discrimination by enabling discriminatory targeting by advertisers;” that data brokers and health insurance companies use “unreliable and discriminatory heuristics or proxies for characteristics such as race, socioeconomic status, or disability” to “determine coverage for people they deem more likely to require more expensive care;” and how universities use software to determine whether a student will struggle academically and use “race as a strong predictor for poor performance.”

“Increasingly, scholarship has shown that marginalized or underserved communities are especially in need of robust privacy protections. These studies have shown that not only are these communities often materially disadvantaged with regards to the marginal effort required to adequately manage privacy controls, they are often at increased risk of suffering harm from losses of privacy or misuse of collected data,” the notice reads, later adding: “In light of these and many more examples, it is critical for policymakers to understand how information policy can reduce data-driven discrimination and disparate treatment.”

After the sessions, the NTIA will also have a request for comment period, where members of the public can weigh in as well.

Ultimately, the NTIA will produce a report that will focus on a number of issues, including: the link between current civil rights laws and privacy laws, workplace surveillance that may be discriminatory, and the “role and adequacy of current civil rights laws, related protections, and enforcement thereof in mitigating privacy harms against marginalized communities.”

The Biden administration’s focus on data privacy comes as the issue has been raised with other parts of the government. In October, more than 40 civil rights and public interests groups urged the Federal Trade Commission (FTC) to crack down on abusive and discriminatory data practices and establish rules that would prohibit them.

Similarly, a group of Democratic senators also asked the FTC to start a rulemaking process that would “protect consumer privacy, promote civil rights, and set clear safeguards on the collection and use of personal data in the digital economy.”

In Congress, several lawmakers called for Congress to finally pass federal data privacy legislation in the wake of a report that noted Amazon killed or undermined state-level bills in 25 states.