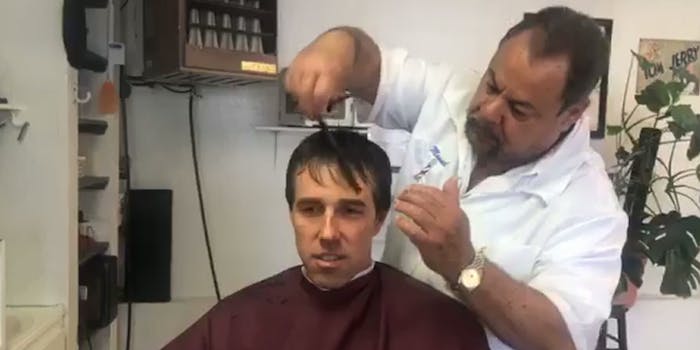 Beto  O’Rourke, a 2020 presidential hopeful, livestreamed a haircut he got on Wednesday, and people had some questions about it.

The 17-minute video starts by O’Rourke listing all of the places he’s campaigned at in recent weeks, before explaining the backstory of the barber, who came to El Paso and opened up a business after leaving Mexico.

“We broadcast via live stream a lot of town hall meetings, which are good because I want you to hear what’s on the minds of those across this country when we meet,” the 2020 hopeful said in the video. “But also, I think its fun sometimes just to have a moment like this when we’re not in a town hall, we’re not answering policy questions–just showing a little bit of life in El Paso.”

At one point in the video, as a Washington Post reporter pointed out, O’Rourke notes that he needed to get his ear hair cut something you need to do as you “get older.” He also took questions during the live stream.

At one point, a random person wanting to get a haircut walks into the barbershop and asks if O’Rourke is the mayor or governor. When he realizes O’Rourke ran for Senate and is running for president, the man says: “You’re great man, I’ve seen you all over the TV. You’re better looking in person!”

The video evoked a similar live stream O’Rourke had during his ultimately unsuccessful bid to defeat Sen. Ted Cruz (R-Texas) during the 2018 midterms when he livestreamed a trip to the dentist office and answered questions about the Texas-Mexico border.

The latest live stream caught the attention of people online.

Beto: I need a haircut that pairs well with this novelty propeller hat for children

To be fair, Beto streaming his haircut is better than Beto at the dentist.

Even fellow 2020 hopeful Rep. Eric Swalwell (D-Calif.) weighed in on the haircut, responding to a tweet about it using a GIF from Mean Girls when Regina George says “stop trying to make fetch happen.”

O’Rourke put himself on the radar using similar social media tactics during his 2018 midterm run, and every other candidate has tried to emulate the idea of live streaming everyday tasks while answering policy questions.

At least he wasn’t standing on a counter while he was getting his haircut.