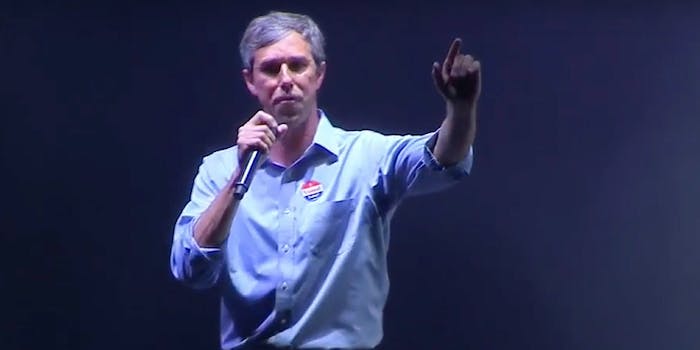 Beto O’Rourke’s farewell in Senate race: ‘I’m so f*cking proud of you guys’

The line lifted some disheartened spirits.

“I want to thank this amazing campaign of people, not a dime from a single PAC, all people all the time in every single part of Texas,” O’Rourke said during his speech in El Paso. “All of you showing the country how you do this. I’m so fucking proud of you guys.”

Beto O'Rourke: "I'm so fucking proud of you guys."

O’Rourke’s campaign raised millions of dollars and won the internet’s heart in a series of viral moments, but Cruz still pulled ahead in one of the most closely watched midterm elections. With 86 percent of the precincts reporting Tuesday night, Cruz had won 51 percent of votes while O’Rourke had only 48 percent.

Though many on Twitter were disheartened after O’Rourke’s loss, his unexpected use of the F-bomb on national television lifted their spirits just the slightest.

Well I did enjoy Beto saying "fucking" on national television.

We’re fucking proud of you too, Beto.

It’s unclear what O’Rourke plans to do next, but lots of people think it would be fucking cool if he ran for president.

Me calling Beto to make sure he runs for president pic.twitter.com/yu1utxhZcK