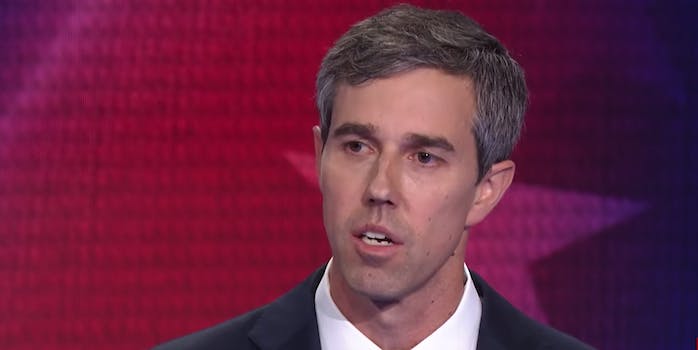 Why did he shout-out a Trumbull?

In the numerous profiles of Beto O’Rourke that have cropped up ever since he entered the national scene, much has been made about his time as an aimless gadfly in New York City. One job he had during this directionless period was for a company called Hedley’s Humpers, where he moved fine art, including a Picasso.

Apparently, that job made an impression on him, because when asked by Chuck Todd during Wednesday night’s 2020 Democratic debate—about whether he would prosecute President Donald Trump for his behavior outlined in the Mueller Report if elected—O’Rourke waxed about a painting.

In what was an extremely normal and casual reference, O’Rourke went on about Washington Resigning His Commission, a painting by John Trumbull, who painted some of the most famous scenes from the Revolutionary War.

“One of the most powerful pieces of art in the United States Capitol is the Trumbull painting of General George Washington resigning his commission to the Continental Congress, at the height of his powers, submitting to the rule of law and the will of the people,” said O’Rourke. “That has withstood the test of time, for the last 243 years. If we set another precedent now, that a candidate who invited the participation of a foreign power… if we allow him to get away with this with complete impugning, we will have set a new standard. That some people …are about the law and we cannot allow that to stand. We must begin impeachment now.”

O’Rourke went on to say he would direct his Department of Justice to look into Trump obstructing the investigation into his campaign. But people had questions about the Trumbull reference. Mainly… why?

Beto: “the greatest piece of art in the US is the John Trumbull painting of George Washington resigning his commission. It shows how a president should submit to the rule of law. In this essay I will…”

The hell is that beto answer?! how does john trumbull even work with that answer. it sounds like someone trying to answer an pre-1865 art history oral exam.

Then there were some who thought, despite O’Rourke’s assured delivery, he got the main message of the Trumbull painting completely wrong.

Beto just completely misunderstood the Trumbull painting of Washington resigning his commission. GW wasn't respecting the rule of law and the will of the people. He was creating the rule of the law in the face of a people whose will would probably have had him stay in power.

Or maybe it was a reference to Dan Brown’s The Lost Symbol, a note that the key to impeaching Trump lies somewhere in the message hidden deep within that painting.