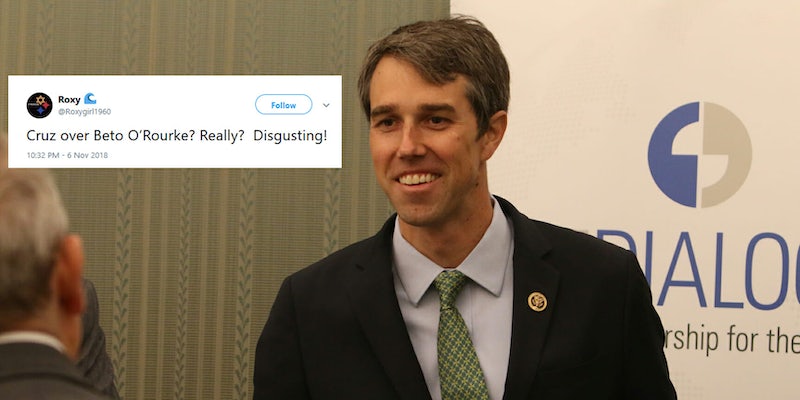 People had a lot of feelings.

After Sen. Ted Cruz (R-Texas) kept his seat in Texas, holding off a strong showing from Texas state Rep. Beto O’Rourke (D-El Paso), many people online were not happy.

O’Rourke, who raised an enormous amount of cash and drew national fixation, had clearly captured the hearts of people online. Many people made their thoughts known almost immediately after the race had been called.

The loss for the Democratic candidate was not met well on Twitter, though some people had hope about O’Rourke’s future.

A state that elects Ted Cruz fucking deserves him. I look forward to supporting Beto O'Rourke when he is eventually elected somewhere. #ElectionNight

Live in MI but…. damn …..was praying for Texas to pull their heads out of their asses and vote the O'Rourke…..but no they choose the moron Cruz again. CRAP!!!!!!!

I truly do not understand how one can with good conscious can pick fucking ted cruz over Beto O’Rourke…. I don’t fucking get it

Clearly people online had a candidate they wanted to see win.