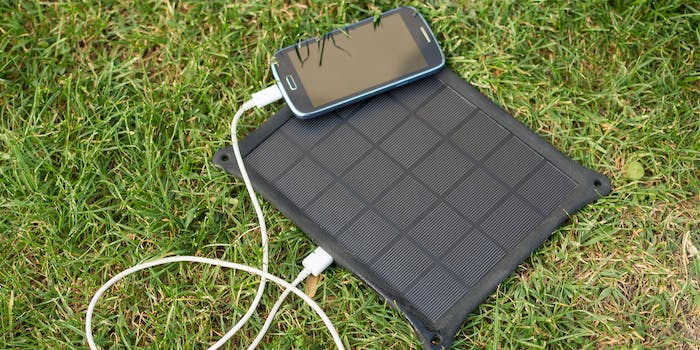 Harness the power of sun: The best solar-powered phone chargers

It's time to cut the USB cord.

Everyone’s had their smartphone die at an inopportune time. Usually, it’s just annoying–like a phone running out of juice midway through a flight. Oftentimes a traditional battery pack can help you out, but not always. What if you’re stuck on the side of the road with no power, or a bad storm causes a blackout, or you get lost on a hike? You’re out of luck–unless you have a solar-powered phone charger.

What should you look for in a solar-powered phone charger?

The first thing you need to do when looking for a solar-powered phone charger is to decide what’s actually important to you. You’ll want to make sure you get something powerful enough for your phone. Average modern smartphones require a minimum of 5 watts to charge. But if you’ve got more devices plugged into the charger, you’ll need something more powerful. The same is true if you want to charge more power-hungry devices.

You should also think about how many connections you’ll need. A connection is where you plug your device into the charger. Are you going to be charging one phone at a time, or will you need the ability to charge multiple devices at once? Depending on your needs you may need a bigger or smaller charger. Finally, it’s important to consider the battery life of your charger. Do you need a solar-powered charger that will hold a charge through the night, just-in-case? If you live in a major city like Los Angeles or New York, you might not. If you live in a rural area or camp a lot, you might.

Before you pull the trigger on a purchase, take all of these factors into account.

What are the best solar-powered phone chargers?

When power matters most, the Anker PowerPort is seemingly unbeatable. This 21-watt monster packs major power into a compact lightweight package. Its beefy 21 watts make it easy to charge multiple phones at once while the foldable design allows for easy storage in a go-back or trunk. It has powerful solar panels, allowing for fast charging up to 2 amps under direct sunlight. Even on a cloudy day, it should be able to get half a charge in four hours of indirect sunlight. Users also get two USB ports to charge their devices with. The only real downsides are the PowerPort’s cost and size. $139.99 might be a deal-breaker for frugal shoppers. Meanwhile at 11-inches by 6.3-inches folded up and 11-inches by 18-inches unfolded, the PowerPort is on the bigger side. But that size comes with power, so it stands to reason you can’t just easily throw this one in a handbag.

At just six inches, the BLAVOR solar power bank is ideal for backpackers, but its benefits go beyond a small size. This 18-watt charger comes with a rugged, durable build that’s splashproof, dustproof, and shockproof. It also comes with a built-in compass and flashlight. Charging the bank on a power outlet takes six hours, while a full charge via the solar panel takes 40 hours. However, when fully charged, this power bank has enough juice to charge an iPhone X twice or an iPhone 8 three and a half times. There is only one USB port on the power bank, but it does have a wireless charging option for phones: Users with an iPhone XR/ XR MAX/ XS/ X/ 8/ 8plus, Samsung Galaxy S9/S9 Plus S8/S8 Plus or any other qi-enabled devices should be able to wirelessly charge with this unit.

Solar chargers don’t get any more basic than the Dizual power bank, but that doesn’t make it a bad device. For just $20 you get a solar-powered battery in a durable case that’s both shock- and water-resistant. This simple power bank won’t keep your iPad alive but provides plenty of juice for your average smartphone. With a full charge, the Dizual power bank can charge a smartphone completely in two hours. It takes about six hours to fully charge the Dizual on a wall outlet…but if you’re looking to fully charge it in the wild, you’ll be waiting a while. This model takes up to 30 hours to reach a full battery outside. Still, when you’re stuck in the woods with nothing else, it’s a cheap way to stay plugged in.

When planning for the worst-case scenario, the RAVPower Solar Charger offers an incredible mix of affordability and power. For $70 you get three USB ports on a 24-watt solar panel that’s waterproof and foldable. That’s more than enough power to charge multiple devices at once, with iSmart technology that detects the optimal charging current for each plugged-in device. There’s just one problem: It doesn’t include a battery. This panel sends the charge directly to your device, but you can soak up power to use later on. However, it can be used to charge battery packs quickly, thanks to its powerfully 24-watt capacity.

While the BLAVOR charger is perfect for day hikes, the RLERON power bank is there for the long haul. Its massive 2400mAh capacity can charge an iPhone or Galaxy phone six times before needing to recharge. That’s also enough power to charge multiple devices at once on the power bank’s four USB outputs. Never get stuck with the wrong charging cord thanks to inputs for micro USB, Lightning, and USB-C cables. The larger capacity size means charging this power bank via its solar panel takes a while–it could take up to 60 hours, in fact, to fully charge the RLERON with nothing but the sun. (But it’s worth remembering that a full charge is enough to power an iPhone six times.) At 16.5 percent capacity, you can fully charge your phone. Like the BLAVOR, this model also includes a flashlight for use at night. What is lacks, however, is protection. The BLAVOR has a protective case, where you’ll need to baby the RLERON if you want it to live a long life. You just have to weigh your needs.